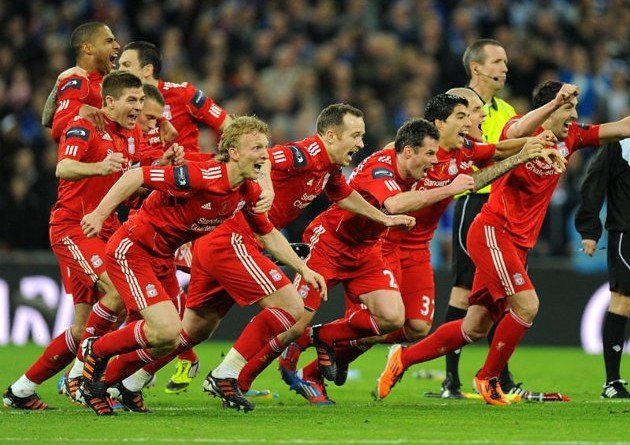 League Cup Match Reaction
February 27, 2012May 24, 2014 Steven McMillan 3 Comments Carling Cup Final, Trophy drought OVER
It’s only when the Captain lifts the Cup that you truly believe it’s yours. Call it a tin pot, say it’s not a major trophy. Tell that to the players who haven’t won a thing and achieved even less. You can’t tell someone that fought for 120+ minutes and then sat through the gut twisting agony of a penalty shoot-out that you’re not wholly impressed. They did that for you. The one who spends their time obsessing over their team, their religion, their reason for the consumption of oxygen. Recounting every intricacy of every moment, asleep as well as awake. That was for you. Over two hours of football. Mental, physical, emotional obliteration. We won it. One small step towards rebuilding a dynasty, one giant smile for the rest of the week.

Cup finals like these are what makes football absolutely amazing. There were highs and lows, moments when we thought we had the match won, and moments when we thought we had lost it. Cardiff City proved they were worthy of being at Wembley. Their players gave absolutely everything they had for 120+ minutes. It was a proud display but there has to be a loser and on this day, it was them. 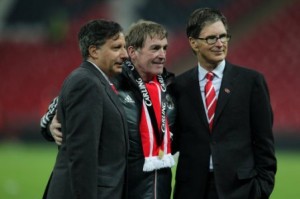 After Cardiff leveled the score at 2-2, thoughts of failure began to cloud my mind. Liverpool players have not had a great deal of luck from the penalty spot this season. Even the always reliable captain had his attempt saved. A loss for Liverpool would have been psychologically catastrophic. Somehow we got by and the ‘other’ Gerrard had the unfortunate distinction of gifting us with the Carling Cup.

I loved the outpouring of support from players and former players along with the biggest boss of the club, Linda Pizzuti Henry, who was live tweeting pictures of the celebrations. The other owner, John, was party to the spectacle that rivaled a World Series Final. He said this was the first step to restoring the club to its former glory. We can feel good about the trophy drought being over, that the hard work is beginning to pay off and the club is headed in a good direction. It is, however, back to work on Monday.
–CSD

Do nervous, wobbly wins in Cup Finals really need to be part of The Liverpool Way? But alas they are, and this was yet another from the mould of the CD Alaves UEFA Cup win in 2001 and the West Ham FA Cup victory of 2006, with all of the associated heart palpitations, adrenalin spikes and involuntary butt-clenching. When Charlie Adam spooned his penalty into the lower reaches of outer space, I feared the worst – our shot at getting back into the honours list had passed us by.

However Lady Luck often wears red on these big occasions, and our dreadful early penalty efforts were matched by some unlucky post hits from Cardiff.

Is anyone actually talking about the actual football match now though? It was a pretty nondescript performance by us, and the tactics were far from perfect. It was a match of high intensity and drama, yet 3 of the goals were pigdog ugly and neither team looked like they had a grip on the trophy until Anthony Gerrard’s penalty rolled fractionally wide.

Here’s to success, silverware and the psychological boost we are apparently supposed to take into the downhill section of the course. Or was that only if we won the match cleanly on merit?
–Grubb 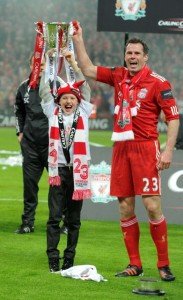 It was supposed to be so easy; but it never is.

It’s hard not to write about Cardiff City and the wonderful performance they put in, but this blog isn’t prone to singing the Blues. Banging the media doldrums and saying a shootout is a “lottery” or a “50-50 chance” is downright lazy and I don’t agree with all that anyways. Do I feel a pang of sympathy for the Bluebirds? I sure do. Did the better team win? Yes, even if only barely. Still, that’s all that really matters in the end. No truly contentious decisions to mar what was an excellent day of football from both sides.

From a Liverpool perspective, dominance wasn’t there; we were more Norwich City than Manchester City, but one step forward is always better than two back. No one in their right mind will use this victory to paper over the glaring cracks still present in our everyday set up. The tactics aren’t always quite right, the quality isn’t always up to the level it should be, the formation could use some work, but in the end, we won a Cup. Six years without a trophy has come to an end. Pissing and moaning is all well and good, but you have to spend some time being happy. It’s only a game, mind you…