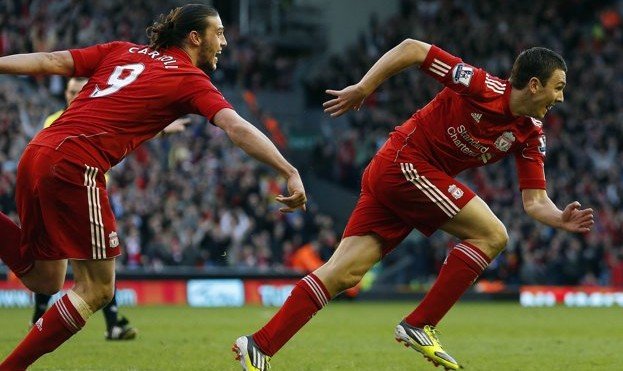 FA Cup Match Reaction
March 19, 2012 Steven McMillan 2 Comments FA Cup quarter-final, Kenny Dalglish, Luis Suarez, Peter Crouch, Stewart Downing, Stoke City FC, Thomas Sorensen, Tony Pulis
It’s a swift return to Wembley for Liverpool as Stewart Downing took another step towards silencing the doubters still gathered en masse around Anfield by scoring the winner in a tense FA Cup victory over a dogged Stoke City side. The Potters made a match out of it when former Reds target man Peter Crouch cancelled out Luis Suarez’s coolly taken goal to press the home side until the bitter end. Although Liverpool enjoyed the lion’s share of possession, chances were few and far between at both ends of the field as Tony Pulis’s side continue to show the big boys that they’re here to play.

It was a war of attrition from the get go. In typical Stoke fashion, the visitors played a tight game at the back with ten out of eleven players behind the ball almost all the time. A predictably scrappy opening saw little created until a touch of magic from Luis Suarez, switching from his role as the provider in the 3-0 victory over Everton, found us a well deserved breakthrough in the 23rd minute.

A neat one-two with Maxi Rodriguez found the Uruguayan striker, an easy target for the inane chants of the travelling support, on the top of the box to curl in a fantastic finish around two defenders and past a diving Thomas Sorensen to send the Kop into raptures. With the Potters clearly looking the lesser of the two sides, you got the feeling that more goals would soon follow. That assumption wasn’t entirely wrong, though it would be the visitors who would strike the next blow only minutes later.

A series of corners in quick succession ended with Pepe Reina stranded behind Ryan Shawcross while Peter Crouch headed in from only 3 yards out. The big man isn’t quite a prolific with his head as one would expect from a striker of his size, but with that opportunity, it would have been harder for him to miss than to bury the ball in the back of the net. I’ve always been a fan of Peter, despite my better judgement, and it has to be said that he showed a touch of class by not celebrating scoring against his former club where he won the only piece of silverware in a journeyman career that’s spanned almost as many cities as years.

Thankfully, there would be little time for nostalgia as the home side found the winner shortly after the break. Stewart Downing has failed to impress, finding the net only once since his move from Aston Villa in the summer, but it would be the England winger who would secure the Reds a place in the semi-finals at Wembley after a fumbled Steven Gerrard lay off found him streaking into the box. You caught a glimpse of the confident Downing of old when he touched the ball past both Robert Huth and Ryan Shawcross to hammer home a powerful shot.

Stoke failed to match the industry of their first half display, and although they created a moment or two of uncertainty, it would be less than enough to see them through or find their first win at Anfield in over 50 years. Liverpool will now be waiting for the result of the replay between cross town rivals Everton and Sunderland after the two sides drew 1-1 in their first meeting. The possibility of a derby at Wembley will be tempting for Dalglish and his men after a Steven Gerrard hat-trick saw their closest foe’s fall at Anfield only a few days ago. Still, we’ll be taking nothing for granted.

It’s always gratifying to put a stuttering domestic campaign to one side and go on a run in the Cup. Champions League qualification was set as a bare minimum standard at the beginning of the season, but as that looks less and less likely, the prospect of adding another piece of silverware to stand beside the Carling Cup will soften the blow of missing out on a opportunity to once again walk on the big stage. Wembley isn’t Europe, but for me, it’ll do just fine. For now anyways…

There’s only a few days left to enter our contest to win a Liverpool home kit. It’s ridiculously easy to enter and your chances of winning are pretty damn good.

2 thoughts on “Shine On, You Crazy Downing”