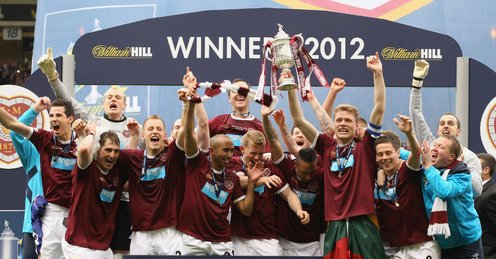 Europa League Match Preview
August 22, 2012August 22, 2012 Steven McMillan 3 Comments Arvydas Novikovas, Brendan Rodgers, Charlie Adam, Europa League Playoff Round, Hearts, Jay Spearing, John McGlynn, John Sutton, Jonjo Shelvey, Jordan Henderson, Oussama Assaidi, Peter Enckelman
The Europa League can throw up some tough sides in many far flung corner of the continent, but on Thursday, Liverpool will be making the relatively painless journey over the border to Scotland for a Playoff Round showdown with Edinburgh’s second most famous team — Heart of Midlothian FC. Last years Scottish Cup winners had a short lived European dream last time out after they were rolled over and given a spankingby fellow EPL club Tottenham Hotspur with the English side scoring five unanswered goals. Though most of us like to look at the Scottish game with a bit of contempt for the supposedly inferior quality of football, most of us did the same against West Bromwich Albion last weekend. Look how well that turned out.

The 3-0 hammering was the worst defeat Liverpool have suffered on opening day in 75 years. Was it because we took our opponents for granted? Or did we fall into that now pervasive habit of playing down to our opposition? Either way, Brendan Rodgers can’t afford to see his side dish out more of the same come Thursday; it was only the first match of the season, but it’s time for a response.

With the specter of Manchester City lurking on the horizon, Rodgers may take a cautious approach when it comes to squad selection; lest he burn his star men out. A 1-0 away win against Belorussian side FC Gomel in the previous round saw mostly kids and fringe players take the reigns and it’s likely we’ll see much of the same tomorrow. New boy Oussama Assaidi has been ruled out of making his Liverpool debut tomorrow as the Moroccan is cup tied after playing for Heerenveen in an earlier round, but Charlie Adam, Jonjo Shelvey, Jay Spearing and Jordan Henderson were all missing at the Hawthorns last weekend and each is a viable option to stake a claim for a midfield spot.

Charlie Adam could be in the frame to make a return to the league where he made a name for himself with Glasgow Rangers. The Scottish midfielder has warned that a trip to Tynecastle won’t be a walk in the park. While Adam comparing a Europa League clash to matches against Manchester United and Everton may be slightly off point, there’s no doubt that progression is extremely important.

The Jambos received a boost pre-match by being granted special dispensation from UEFA to include Finish goalkeeper Peter Enckelman in the squad after their new signing was registered late, but it’s going to take more than a ex-Premiership ‘keeper to stop the Reds from charging right in. John McGlynn’s side blew a 2 goal lead at home to Inverness over the weekend after Arvydas Novikovas and John Sutton put the home side in front. Their inability to hold onto the lead will be something that Rodgers will be looking forward to after his side failed to score on opening day despite a wealth of chances in the first half.

If the Reds needed a match to get back on track, this is their opportunity. With a hard start to the season ahead and a missed chance to start with a bang against West Bromwich Albion, a positive response from Rodgers’ men is key. Progression in Europe is important, but so is scoring some damn goals. If we can’t put a few past Hearts, what chance do we have against Manchester City on Saturday?

3 thoughts on “The Europa League Moves to Edinburgh”