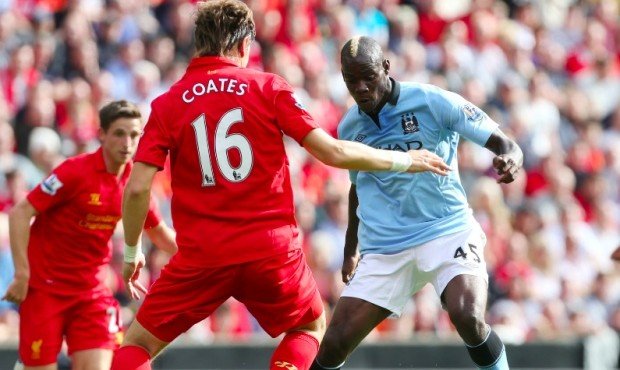 Analysis
August 27, 2012August 28, 2012 Steven McMillan 7 Comments Analysis, Brendan Rodgers, joe allen, Manchester City, Raheem Sterling, Sebastián Coates
Liverpool boss Brendan Rodgers may say he has no complaints after drawing 2-2 with Manchester City at Anfield yesterday, but you get the feeling that he may have a small twinge of disappointment after the Reds were not as strong in possession as he would have liked. His call for Anfield to become a fortress echoed managers past, but while the pass and move ethos makes Liverpool a hard nut to crack no matter where they may be, his system values holding the ball above all else; the Reds could manage only 48.7% of it compared to the Citizens 51.3%, though every second of it was hard fought.

While we’re still a while off from Rodgers preferred tactic of resting on the ball, the fact that the young side he selected against the defending champions contained six players under the age of twenty-three, you’d be fine to take a  moment of reflection. Impressive stuff to say the least, and thanks to EPL Index, we have the stats neccecary to take a quick look at 3 of those players.

On his Anfield debut, Joe Allen put in a Man of the Match performance. The Welsh midfielder, signed from Swansea, is looking to be a steal at £15mil and yesterday against Manchester City he took a large step towards proving that he can cope even without the commanding presence of Lucas. To be fair, Joe is one of the only players that has worked with Brendan Rodgers in the past and knows his system inside and out. Even though it’s still early, the youngster looks like he’s going to be an essential cog in the Red machine.

The Uruguayan youngster did well to partner Skrtel in the heart of defense with Daniel Agger missing out through suspension. His height and speed were a major factor in his selection ahead of Jamie Carragher after the veteran played the whole 90 minutes in the Europa League Playoff match against Hearts on Thursday. Whether fatigue played a role or not is up for debate, but Coates put in a serious performance at Anfield yesterday that could cement his place as third choice going forward.

If Coates starting over Carragher wasn’t enough to surprise you, then seeing 17 year old Raheem Sterling preferred to £20mil Stewart Downing should be enough to bug out your eyes. We’ve seen the youngster mature in leaps and bounds since making his first team debut last year under Kenny Dalglish and after an impressive pre-season, he looks set to repay the faith the manager has shown in him. Though he’s still too young to be consistent and may not be first choice for long, we’ll certainly see more of him as the season heats up and the matches begin to pile on.

Six out of ten players on the field under the age of twenty-three. Give that some time to marinate up stairs and consider what these kids could do given the proper amount of game time and mentoring. Rodgers’ willingness to blood the youngsters ahead of the more costly veterans will pay dividends in the future. Maybe not for all of them, greatness is only for some. This isn’t a short term project.

If the owners give him time to develop a football culture, Liverpool can not only thrive, but employ a sustainable model for future growth. All that financial mumbo-jumbo will be discussed a few months down the road, but we saw something today that I hope becomes a hallmark of future Liverpool sides. We can’t keep buying youth and letting them rot on the bench or in the 2nd team;
they need development, faith and chances at the top level.

Money is nothing. You don’t buy a legend, you grow one.

All stats and figures courtesy of our friends over at EPL Index. Check out the site and give them a follow on Twitter before you sign up.

7 thoughts on “The Kids Against Manchester City: Looking at the Stats”