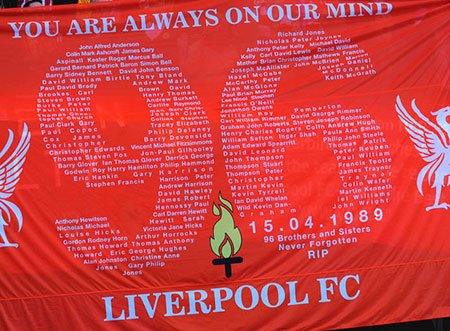 Match Preview Premier League
September 14, 2012September 14, 2012 Steven McMillan 0 Comments Adam Johnson, Brendan Rodgers, Carlos Cuellar, expose the lies before she dies, Hillsborough Stadium Disaster, joe allen, John O'Shea, Justice for the 96, Luis Suarez, Martin O'Neil, Nuri Sahin, Raheem Sterling, Sunderland
After a day like yesterday, it’s not hard to put the trivialities of football aside for a little while and reflect on things far greater than the minute details of the beautiful game. So, we take some time to re-affirm what we’ve known for years but has finally been acknowledged as God’s honest truth.

A massive cover-up by the South Yorkshire Police department and the then Conservative government of Margaret Thatcher. Slander and outright lies to smear the dead as the perpetrators of this tragedy and deflect the blame from those responsible. 23 years later, we know that blood-alcohol tests were performed on children without the consent of the families and criminal record checks were run before death certificates were even considered. At least 116 documents edited or changed to remove comments incriminating anyone but the contemptible, working class dead.

It’s a strange mixture of feelings, one that I can only imagine would be amplified beyond comprehension for those families and their support network that, even the face of grand adversity, never gave up the fight. A sense of relief and vindication that their struggle for full disclosure was not in vain coupled with the disorienting feeling of horror now knowing without a shadow of a doubt that a large number of the victims could have been saved. Your son, daughter, brother, sister, husband, wife, or friend could have come home that day. They could of been reading this preview that never was and making last minute preparations for the trip to Wearside tomorrow; but, they’re not.

A late fitness test for Black Cat’s winger Adam Johnson, musings on the likely pairing of Joe Allen and Nuri Sahin in the midfield, Luis Suarez shaking off jet lag after a long flight from South America, a stop-gap solution of Carlos Cuellar and John O’Shea in the heart of the Sunderland defence and a strange notion that youngster Raheem Sterling is being bedded into the first team too quickly are moot points for the time being. Brendan Rodgers and Black Cats boss Martin O’Neil have other things on their mind.

This isn’t just about clearing our name. You’d be a ignorant fool to not understand that this is transcends petty footballing matters. Vile chants lobbed like so many loathsome daggers of hatred only matter so much as people believe them; and now, with full disclosure on the table, they’ve been dispelled for the lies they always were.

Now that the truth — the real truth — is finally known, justice is soon to follow. After 23 long years, apologies are hardly enough. As we return to league play from a long international break and the Reds travel to the Stadium of Light in search of their first victory this season, very few are bothered with the football. Even if we come away from Sunderland without those much needed points, there’ll still be a feeling of contentment on Merseyside. After almost two and a half decades of fighting, we’ve won.