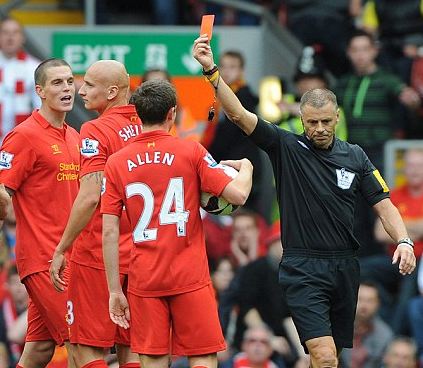 If you are like many other Reds fans, then last Sunday you were screaming the name Mark Halsey along with a few other colorful words. Oddly, none of the other words were actually of colors. Not sure where that saying comes from. Anyways, I digress. Some fans went as far as to wish cancer on poor referee Mark Halsey after a controversial red card decision on Jonjo Shelvey and giving a penalty to United after an obvious dive by Valencia.

This is one of the few times that I was not totally embarrassed of having to watch the match on Fox Soccer Channel and put up with Eric Wynalda’s shtick because he did have some good things to say. I won’t quote it word for word, but the basis was that going by the laws of the game, both Shelvey and Evans should have received red cards. However, they did not, only one did and then you have the game decided by a dive which is just an outright embarrassment. Who is really to blame though?

You would probably like to blame Halsey since he is the one who made the call. It is his job to make the call and when someone obviously fails at his job, it is natural to be angry and wish for some sort of reprimand, though cancer seems to be a bit far. My problem with the whole situation is that even though I have grown to detest EPL referees, I really do not feel they have the tools they need. If you think the officiating in English football is atrocious, just ask yourself this: who would want the f*cking job?

The eyes of the world are on you, especially in big matches like Liverpool vs United, and all you have are four officials trying to get it right. Actually, scratch the fourth official, all he does is listen to the managers complain and occasionally hold up his Lite-Brite toy. So, now you’re down to the referee and two linesmen. In reality, however, it is the referee and one linesman because the linesmen are only responsible for half of the pitch. Now you have a situation where the referee is running around somewhere in the center of the pitch with the only other official a full 30-40 yards away from anything happening in front of goal. Oh, and let’s not forget the 20 or so players on the pitch blocking the view of the two officials. Those players also happen to play at a phenomenal pace. We shouldn’t ask how did they get it wrong? We should be asking how the hell do they ever get it right?

This system of officiating is absolutely archaic along with many rules of the beautiful game. While training methods, tactics, and even the uniforms worn by players have been enhanced by technology, one thing remains the same: the referee is always at a disadvantage. How many seasons has it been since goal line technology was first mentioned? Something so simple as making sure the ball crosses the line can’t even get instituted because FIFA, UEFA, and the other governing bodies fear change. The governing bodies of this game make loads of cash so there is absolutely no incentive for them to change anything for the betterment of the game when to them it does not seem broken. If something was wrong, their revenue would take a tumble, right?

Will anything ever be done? Probably not. Every winter it turns cold and the summers are hot and we all sit around and act surprised. I just can’t believe how cold or hot it is, yet it happens every year. Bad calls have also arrived on schedule and it is time for us to yet again stand around and pretend to be surprised. We will continue to watch and FIFA, UEFA, the FA, and all the other nitwit governing bodies will continue to fill their purses with our hard earned cash in spite of this cold reality.

One change that would be nice to see and is actually doable is if the match officials were to wake up and demand the tools they need. I understand good referees are in short supply. What if you guys got together and demanded the help you need to do your jobs more accurately? Instead of demanding respect, demand something that will actually matter and respect will follow.