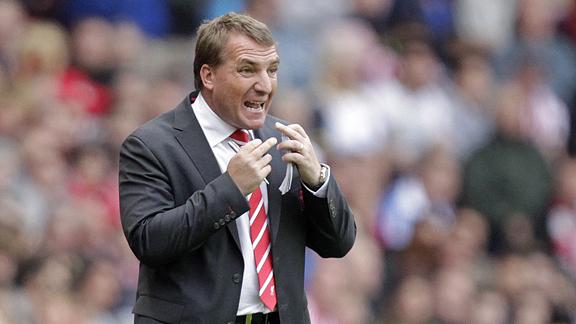 Match Preview Premier League
September 28, 2012September 28, 2012 Steven McMillan 1 Comment Alex Tettey, Brendan Rodgers, Chris Haughton, Daniel Agger, Fabio Borini, injuries, Lucas, Mark Halsey, Martin Kelly, Norwich City
Having the kids roll over West Bromwich Albion in the Capital One Cup midweek leaves the senior squad rested and ready to hunt down our first league win of the season when Brendan Rodgers takes his men out to farming country to face off with Norwich City on Saturday. There’s no rest for the wicked as the fixture pile-up get’s that much more crowded as Liverpool look to navigate 3 competitions with a squad that’s not quite as deep as it could be. By the time fall rears it’s ugly head, you start to get a good glimpse of what your boys are made of, and since we’re still looking for the first 3 points of a season that got started over a month ago, there’s a good possibility that each and every one of them is composed entirely of highly flammable straw.

While we’re not about to sign them up for weekday jobs as scarecrows, when it comes to snatching a win, there’s no time like the present and the Canaries could cough up the 3 points that everyone has been waiting for. The Reds had a tough start to the season with Manchester City, Arsenal and Manchester United all making house calls within the first few weeks of the campaign and when you’ve got a new manager that’s installing a whole new system, there’s going to be some bumps — and, of course, unavoidable, unrelated injuries.

The news that Martin Kelly will be out until the closing stages of the campaign after rupturing his anterior cruciate ligament in the 2-1 reversal against United came as a blow to the squad, but Rodgers was able to shine a little light with a a few positive updates as well. Both Daniel Agger and Lucas are progressing ahead of schedule with the Danish defender having a 50/50 shot of making an appearance on the weekend. Though toying with the fitness of a man with a track record like Agger’s is an iffy proposition, the availability of Sebastian Coates could buy the injury prone defender a bit more time on the treatment table after the Uruguayan put in a solid shift against the Baggies on Wednesday.

Norwich also found joy in the Cup with a 1-0 victory over Doncaster Rovers courtesy of Alex Tettey’s debut goal. The Canaries sit one point ahead of Liverpool in the table with three draws giving them one more point than the Reds and keeping them out of the relegation zone — for now anyways. Though they’ve only scored twice in their opening 5 matches, Norwich boss Chris Haughton will be looking to build on the momentum from the Capital One Cup victory and will have no qualms with kicking the Reds when they’re down; not that Brendan Rodgers would be surprised to see another boot come flying in.

The Liverpool gaffer has complained to referees’ chief Mike Riley with concerns that his side have been treated unfairly this season. The Reds have had a number of calls go against them — most notably by referee Mark Halsey in the meeting with United last weekend — and the Ulsterman believes that certain decisions passing them by has played a pivotal role in their fortunes. Though it’s hard to deny that his side have been hard done by, we’re certainly the architects of our own fortunes.

Fabio Borini may also be fit for the trip to Carrow Road after a swollen ankle forced a halftime substitution against United, and the Italian will be looking to find the back of the net for the first time this season as the Reds continue the search for that elusive win. Ref decisions are one thing, not scoring is a complete other. Borini has been unlucky not to find the back of the net on a number of occasions with that touch of luck a striker sometimes needs going missing. The rest of the squad has been building in leaps and bounds as the system begins to take root and it won’t be long until the Italian falls in line and remembers what it’s like to wheel away in celebration. If that coincides with 3 points for the coach ride home, all the better.

Looking to play the odds this weekend? Hit up Betegy and give yourself a fighting chance.