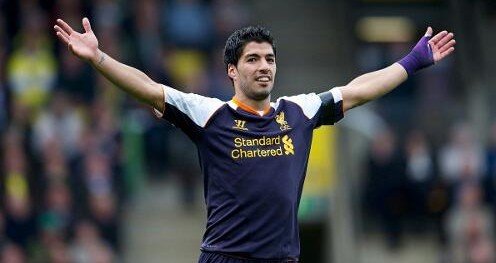 Match Reaction Premier League
September 30, 2012December 4, 2013 Steven McMillan 2 Comments 5-2 wins, Andre Wisdom, Brendan Rodgers, Chris Haughton, Grant Holt, Hat trick, joe allen, John Ruddy, Luis Suarez, Michael Turner, Norwich, Nuri Sahin, Pepe Reina, Steven Gerrard, Steven Morrison, Suso
It was only five months ago that Luis Suarez scored a memorable treble at Carrow Road which culminated in a jaw dropping chip from just inside the Norwich half; another trip to farm country, and the man from Salto, Uruguay has done in again as Liverpool wrack up their first three points of the campaign with an emphatic 5-2 victory against the Canaries. Nuri Sahin and Steven Gerrard also found the net as Brendan Rodgers tasted league victory for the first time, but having Luis score three will be the cream in the coffee of a win that’s took too long to come. The Reds have gotten far less over the opening weeks than their play suggested and though there will be those that say it’s only Norwich City, their missing the point completely.

Maybe we had a second or two more on the ball and maybe Chris Houghton’s side is stack with players a little less prestigious than those bolstering the ranks of Arsenal and Manchester United, but we treated Norwich exactly the same as we did the big boys. Our style, besides maybe a tweak and twirl here and there, remained the same. The tactics might have been a touch more aggressive, but the foundation and focus didn’t change. Possession above all else, move the ball, keep your head up, take your chances; we have a system in place and today we saw that, given time, it can and will work.

The only thing we’ve done consistently wrong since last season ended and this one started was continue to miss an abundance of chances. Well, less than 2 minutes after kickoff, Suarez had his first. It’s the last thing the Norwich fans wanted to see after the Uruguayan took the entire team apart bit by bit during Liverpool’s last visit, but it was about to play out again like some unwelcome deja vu.

A blatant penalty for Suarez is once again waived away, Norwich threatened a equalizer through Simeon Jackson, Gerrard would head directly at Canaries ‘keeper John Ruddy and the Uruguayan would waste a brilliant one on one only moments later; then the bile raining down from the stands was silenced for a glorious second. Pundits the world round were already lamenting the Red’s wastefulness in front of net when Luis caught Michael Turner having a wee nap and picked the defenders pocket. If only to add insult to ignorance, the striker would nutmeg the same Turner on his way to the net, where a audaciously curling shot with the outside of his foot would leave Ruddy with no chance and double the visitors lead.

The sound of the backspace button being clicked repeatedly would have been deafening had the roar of the travelling Kop not drowned out the condemnation disappearing off the screens of laptops everywhere.

After scoring a brace in our midweek Capital One Cup meeting with West Bromwich Albion, Nuri Sahin was given the nod alongside Steven Gerrard and Joe Allen in the Reds midfield and the Turkish playmaker did not disappoint. It turned from a pair in front to a treble when Suarez set up Sahin to tap home and El Pistolero would be rewarded with the Match Ball after the Norwich defense, retreating into themselves as the minutes ticked down, allowed him to shoot from the top of the box. Not as surprising as the first, not as spectacular as the second, but a hat trick is always as nice as you’d like. Steve Morrison would pull one back for the Canaries after Pepe parried a shot into his path and Gerrard would have a deflected shot find the back of the net before Grant Holt made it two for the home side, but that would be too little and far too late; there was no way we were losing now.

With a league win for Brendan Rodgers finally on the books, Liverpool move out of the relegation zone and set their sights on the long climb up the league table. Defensive lapses once again lead to the Reds leaking needless goals, but that’s a discussion for another time. Today, we scored more than we allowed and that’s reason enough to have a smile. Suso and Andre Wisdom both turned in impressive debuts, Pepe Reina looked more like Pepe Reina with some fine reaction saves, the midfield trio of Allen, Gerrard and Sahin ran proceedings with the strict efficiency that three in the middle demands and Brendan Rodgers smiled wide when a 21 pass buildup lead to the Captain closing things out with the fifth goal of a well deserved win.

Five goals; revel in the that for a moment and digest, if you can, the opening weeks of a campaign that started the way no one would have wanted. Before that result, it was two points and relegation. Post Norwich, it’s our first win and a positivity once again spewing forth. There’s miles ahead of us and the road is fraught with perilous trips all across the land, but we’ll sleep well again tonight. It’s only Norwich, that’s for certain; but it’s a start that, Fowler willing, won’t be stopped short anytime soon.