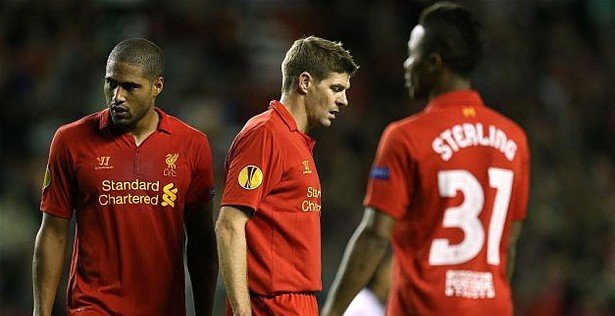 Match Preview Premier League
October 6, 2012 Steven McMillan 0 Comments Brendan Rodgers, Charlie Adam, Daniel Agger, Europa League Group Stages, Jermaine Pennant, Luis Suarez, Michael Owen, Peter Crouch, Steven Gerrard, Stoke City, Tony Pulis, Udinese
A busy week kept me from writing about the midweek loss to Udinese in the Europa League, but I’m sure by now you’re all up to speed on that one. Hardly any surprises there as we fail to convert dominance into goals and defensive lapses allow the Italian side back into the match and then eventually, much to the chagrin of Brendan Rodgers, end up taking over. Even a stunning free kick from Luis Suarez wasn’t enough to rally the troops, and with our first group stage match ending in defeat, we drop to third in the group. If making up ground in the Europa League wasn’t bad enough, we have even more to make up on the domestic front. Since it’s Stoke City this weekend, you know we’re in for a bumpy ride.

Stoke City; I don’t think I can waste any more time writing soley about my disdain for this side. It’s cliche and I understand that. Anti-football, backwards thugs, shackling the beautiful game in an MMA octagon; I’ve heard them all and wrote at least half of them. It’s time to move on and accept the fact that we, and many other sides, have a hard time against the Potters. Despite the entire footballing world disapproving of how Tony Pulis chooses to play, the Potters continue to do it well and get the kind of results that, at this point, even we can be envious of.

There’s few young managers out there who wake up with dreams of being the next Tony Pulis, but you can give the man some credit; he knows exactly what he’s doing and he’s now dragging a decent amount of ex-Liverpool players to Anfield on Sunday. The recently sold Charlie Adam, former Kop idol Peter Crouch, the always controversial Jermaine Pennant and now — the coup de grâce — local boy Michael Owen. If there’s an old Red out of that bunch that can expect a frosty reception, it’s Mickey; he spurned his home town club for the bright lights of Real Madrid, then hardly dim lights of Newcastle before sitting on the bench at Old Trafford. That last one might have been the worst, but seeing him lay down roots at the Brittania isn’t all that appealing either and while he may not understand our displeasure, he never was all that sharp.

While Liverpool boss Brendan Rodgers isn’t likely to stray too far from the side that whipped Norwich in to shape last weekend, he’ll have to take into account the defensive errors midweek that saw us slip down a peg our two when we were looking to be crawling on up. Ahead of the match, Danish defender Daniel Agger has signed a two year contract extension which will put our minds at ease for the time being, but if we keep shipping goals the way we are, signing any member of the defensive unit up for a another tour of duty could be a disaster waiting to happen.

If it wasn’t bad enough when we couldn’t finish our chances at one end, now we’re having a problem keeping them out at the other. In two Europa League games, we’ve seen a combined 13 goals. Having Suarez and Gerrard on song and creating chances — and finishing them — is one thing; it’s a glorious sight to see the goals flying in the other side, but when they’re leaking in past Pepe in record numbers, it’s another story altogether. Needless to say, we need to get this sorted sharpish.

Stoke haven’t take full points from a top flight meeting at Anfield in 49 years and Brendan Rodgers would be loathe to be the boss that allowed things to change. While that might be a real concern, we’ve actually heard some talk of cracking the top four, and to be honest — even for the most optimistic — it’s head in the clouds talk at this point. We’re languishing in the bottom half at the beginning of October and getting pre-match nerves before the Stoke knock on the door. Let’s put in some work before we start to dream, shall we?

Looking to have punt on this weekends matches? Head over to Betegy and get the inside track. You work hard for your money, don’t go throwing it away.