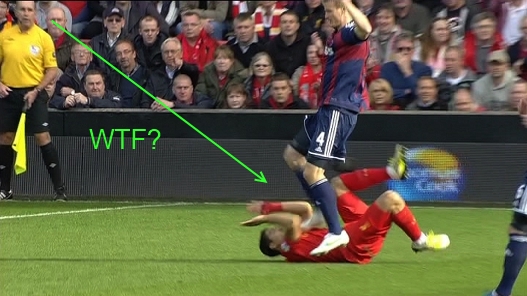 I would like to take a moment to comment about the FA since I clearly do not gripe about them enough. In my last post, I said the FA and other governing bodies were not giving referees the tools they need to make accurate calls. This, however, is ridiculous.

In the first 5 minutes of the match against Stoke, Robert Huth stamped on Suarez’s chest, leaving stud marks on the Uruguayan. Obviously, the linesman had a clear view of the incident. Now, we’ve learned that Lee Mason also saw the incident and has stated he chose not to take action. Care to explain yourself Mr. Mason? Under FA rules, Huth cannot be charged with violent conduct.

As far as the FA are concerned, it’s over and done with. Stamping on Suarez is acceptable in this league as is pretty much any other kind of physical or verbal abuse. The purpose of a regulating body is to preserve balance. Right now, the scales are severely warped in everything the FA does. It is extremely frustrating to watch a club go through a rebuilding period with absolutely everything against them. It should not be 11 v 12 every weekend.

So, the FA sucks and we all know it, but what can be done besides endless whining on blogs like this one? I really have no idea, but I am open to suggestions.