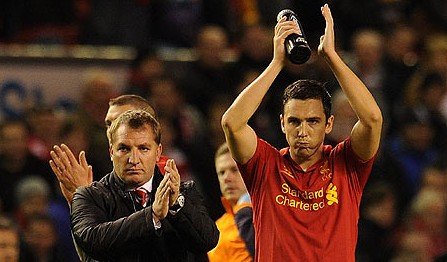 Europa League Match Reaction
October 26, 2012October 26, 2012 Steven McMillan 2 Comments 1-0 wins, Anzhi Makhachkala, Brendan Rodgers, Europa League Group Stages, Guus Hiddink, Stewart Downing
A surprising strike from Stewart Downing puts Liverpool firmly in the drivers seat in Europa League Group A after shutting the door on big spending Russian side Anzhi Makhachkala. Ahead of kickoff, Anzhi boss Guus Hiddink had some flattering words for Brendan Rodgers’ team; after laying a wreath at the Hillsborough memorial, the legendary Dutch boss talked of the resilience of Liverpool and them rising back up to the top where they belong. The Russians would meet a surprisingly strong home side when Rodgers threw caution — and the upcoming Merseyside derby — to the wind and named Steven Gerrard, Luis Suarez, Raheem Sterling, Daniel Agger and Nuri Sahin in the starting eleven. Even with all the big names in the side, it would be misfit winger Stewart Downingthat would provide the breakthrough, and eventual winner, early in the second half.

The easy punt was for Rodgers to name a weakened side ahead of the trip to Goodison Park on Sunday and his first taste of the Merseyside Derby as Reds boss; it’s obvious now, but the easy punt wasn’t the correct one. Only 3 changes were made from the side that saw off Reading last weekend with Moroccan winger Oussama Assaidi, Jonjo Shelvey and Stewart Downing coming into the fold.

Downing, a first team regular under Dalglish after being brought in from Aston Villa for more money than I care to mention, made a rare start and took a small step towards showing Brendan Rodgers what he’s capable of with a right footed strike from distance that left Anzi ‘keeper Vladimir Gabulov stranded. The hosts, predictably, controlled possession throughout but failed to find the all important breakthrough when the chances presented themselves. Shelvey, Gerrard, Agger, Suarez and Sahin had all been denied — either through Gabulov or their own wastefulness — before Downing’s strike finally rewarded the home side for their dogged persistence.

Despite paying Samuel Eto’o a reported quarter of a million pounds per week, the Russians had very little going forward with the Cameroonian attacker ploughing a lone furrow as the sole striker in Hiddink’s side. Anzhi are one of the richest sides in world football, though you wouldn’t know it with the performance they turned out. It’s hard to tell if it was the enormity of the occasion — Anfield can be an intimidating venue for even the most seasoned side — or the rapt organization of Brendan Rodgers side, but in the rare moments Anzhi did threaten, reserve ‘keeper Brad Jones was more than equal to anything they did create.

With Italian side Udinese surprisingly falling to Young Boys today, Liverpool now top their Europa League group with only 3 matches remaining before the Knockout rounds. While many would argue that putting this whole tournament to rest would help far more than it would hinder, it’s hard to discount the allure of another European trophy; even if it is a second rate one. One thing that’s for certain is the Reds must be ready for Sunday. A repeat of the 2-0 loss to Arsenal — which was preceded by a strong lineup being named in the Europa League the previous Thursday — can’t be repeated.

The trip to Goodison is one of the most important fixtures on the calendar and when you couple our poor start to the campaign with our league position, this particular meeting has an extra edge that previous meetings have been lacking. As ludicrous as it sounds, Everton are ahead of us in the table; this Europa thing goes on the back burner until this is rectified.