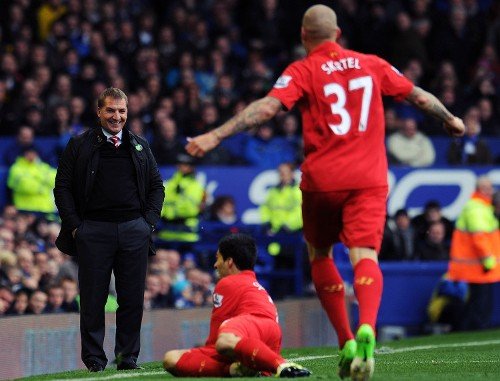 It was a roaring first half in which neither team could establish a foothold, but a tactical shift by Brendan Rodgers after the break settled the midfield after switching to three at the back. With both sides cancelling each other out, a draw looked to be on the cards before Suarez smashed home a Sebastian Coates knockdown from a perfectly delivered Steven Gerrard free kick. The Red half of Merseyside were sent into raptures for a brief second — until an incorrectly raised linesman’s flag stopped the celebrations short.

Big matches can be built up to the point of anti-climax. The backdrop of the Hillsborough Stadium disaster added a somber feel pre-match and concerns were raised that this would be a somewhat subdued affair — thankfully, that’s not what played out. The comically childish dive celebration from Luis Suarez directly in front of David Moyes set the tone within the first 20 minutes and after that it was obvious that the atmosphere that this match is famous for was alive and well.

Racing to a two goal lead within 20 minutes wasn’t what anyone expected; though conceding two goals through our own defensive errors was par for the course. The three man midfield that Rodgers is such a keen practitioner of left the back line exposed on the wings with Andre Wisdom bearing the brunt of the onslaught. The youngster looked out of his league as the Toffees overwhelmed the narrow Reds midfield and forced their way back into the match. The slick passing game Liverpool have used to great effect this season was constantly disrupted — only 76.8% of their passes were completed — but Rodgers would show his tactical acumen with a reshuffling at halftime that would settle things down substantially.

The introduction of Sebastian Coates and Jonjo Shelvey after the break saw the Reds switch to a three man backline and allowed for an extra body to plug up the gaps in midfield. Raheem Sterling — his usual firecracker self — was pushed forward to play beside Suarez and caused the Everton defense a number of problems with his pace and movement. Last season Rodgers was criticized for his lack of a Plan B when Swansea stuttered, but those fears were without merit as Liverpool set up some last minute drama.

A pair of stamps from Luis Suarez — one on Sylvain Distin and one on Kevin Mirallas — incensed the Goodison crowd even more than usual and when the linesman’s flag incorrectly denied the Uruguayan the winner, there would be no complaints from the Blue half of Merseyside. Neither foul showed obvious malice and though only Suarez knows for sure what his intentions were, the offside call was less open to interpretation. When Gerrard delivered the free kick, everyone was onside. As Sebastian Coates headed down the ball into the path of Suarez, everyone was onside. The striker would smash the ball home — still with everyone onside — but the linesman flag would nullify the effort and send the conspiracy theorists into overdrive; and again, it would be the man in black who’d decide the match.

Goal line technology, instant replays on controversial decisions, another ref watching on TV that can be referred to; there’s been so many options put forward that work in so many other sports that not employing at least one is laughable at best. Liverpool have had shocking array of decisions — all across the board and all over the pitch — go against them with this one being the most damaging of the bunch. Three points magically disappear and we’re again left to rue the fact that, despite being the better side, the outcome of the match was never in our hands.