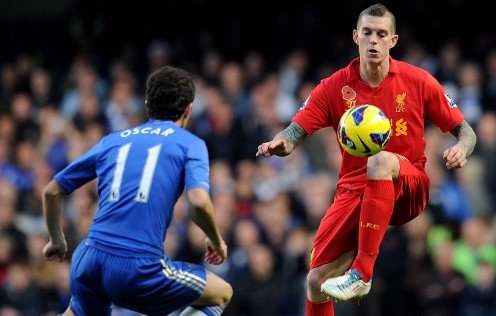 The Reds have done the double over Chelsea in the past two seasons, and if you went by the numbers alone, the visitors should have taken full points from this one as well. A whisker shy of 57% of possession, 87% of their passes completed, more shots on target and more corners; numbers are one thing and the stark reality of the situation is a complete other.

Rodgers decided to hold over held over the 3-5-2 formation we saw in the midweek 1-0 loss to Anzhi Makhachkala in the Europa League as the Gaffer looked to nullify the attacking threat of Mata, Oscar and Hazard by crowding out the midfield. Jamie Carragher made his first Premier League start of the season, slotting in for a sick Martin Skrtel, and was sandwiched between Daniel Agger and Andre Wisdom as Rodgers took a cue from Kenny Dalglish with a three at the back approach. This was looking like it was going to work out just dandy until Daniel Agger lost his man.

We’ve be soft on set pieces ever since the departure of Rafa Benitez and what would have been a routine corner under the Spaniard put us behind. Chelsea captain John Terry, returning from his 4 match ban for racially abusing Anton Ferdinand, found himself all alone after losing Agger and made no mistakes with his free-header. Chelsea were relatively quiet up to this point and though they’d be buoyed by the goal, the home side would get even quieter when John Terry was stretchered off in the 39th minute after Ramires pushed Suarez from behind and into the center back.

With Gary Cahill subbed on, Liverpool would continue to control possession, but continued to do nothing of note with it. We saw more of the saw the same from midweek; controlling the run of play, dictating the tempo and moving the ball on our terms. That all sounds good, but we weren’t putting it into the right places and with a one goal lead, Chelsea were content to sit back, watch us pass the ball around our own half and hit us on the break. Possession, but no penetration, reduced us to a few off target efforts from long range.

Both Oscar and Juan Mata had the opportunity to extend home side’s lead, but much to the chagrin of Chelsea boss Roberto Di Matteo, lacked the clinical finish needed to put the match out of reach. We knew we needed a change at halftime and in the 60th minute, Rodgers would turn it around. We’ve seen him do it once or twice this season with subtle formation switches and tactical substitutions and when Suso was subbed in for the anonymous Sahin, the young Spaniard would be the catalyst that would spark the equalizer as the side shifted back to a more familiar 4-3-3.

We’ve seen Suso used as an impact sub before and he did well to find the kind of space in the middle of the park that neither the Captain or the Turk could. Despite the creativity and forward momentum the youngster would provide, it would be a dead ball situation that would draw the visitors level as the Spaniard delivered the corner that would set up a frantic finish.

Jamie Carragher met the corner with with a perfectly timed header that was flicked across the face of the goal; it was so quick that no one saw it coming and there was little surprise that the ball would find Luis Suarez at the far post. The Uruguayan has been the heart and soul of this Liverpool side during this turbulent start to the season and he’d be cast in the role of savior once again as the striker headed the Reds back into the match and left the Chelsea support slack jawed.

Neither side would be content with a share of the spoils and the formerly cagey affair would open up from there as both Ivanovic and Suarez came close to tipping the scales as the match ratcheted up a few notches. Jose Enrique, pushed forward as a makeshift winger after the formation switch, could have sealed the deal with his first Liverpool goal deep into injury team, but Petr Cech would be equal to his low drive and spare the home side the kind of blushes that can derail a season.

When you put things in perspective, having the likes of Wisdom, Sterling, Sahin and Suso out there pushing Mata, Oscar, Hazard and Ramirez, you take a moment to consider things. If this young side is able to go to the Bridge and grind out a result, then it’s not just foolish optimism; there is hope for the future. On the other hand, that bright future isn’t here yet and the stark reality of the present needs to be addressed to ensure those players are still here to shine a light as they reach their peak in a few years time.

This is Year Zero and a draw with Chelsea at the Bridge is a a good result for any team, let alone a faltering Liverpool side who’s stuck in the wrong half of the table. We’ve got Wigan at Anfield next weekend and another opportunity to flip a page on the calendar and move this project forward; if we can pull one back to share the spoils at the Bridge, we can find a way against Wigan.