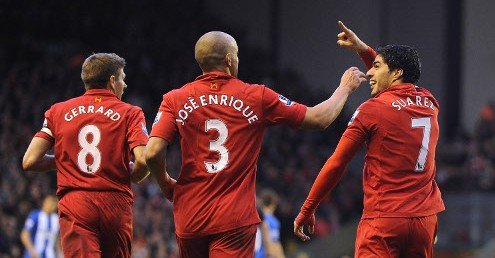 This would be our first win in our last 5 meetings with Wigan and Roberto Martinez will feel a bit hard done by after his side surrendered a promising first half foothold as the visitors thwarted the hosts at every attempt. The introduction of Jordan Henderson early in the second half changed Liverpool’s shape and a small tactical shift, pushing Gerrard a bit further forward paid dividends. A brace from Premier League top scorer Luis Suarez would put the Reds firmly in the driver’s seat and Jose Enrique, predictably switching effortlessly between maddening and sublime, would put Anfield into overdrive with a cool as you’d like winner.

We were all left hoping for more after a 1-1 draw at Stamford Bridge last Sunday left the Reds languishing in the wrong half of the table. Wigan, our bogey team over the last couple of seasons, provided some promise, though no one was about to make any bold predictions; the Latics hold some powerful hoodoo over us and we’ve been embarrassed here before.

This certainly didn’t start out like the barn burner it ended as; the skull drudgery of the opening exchanges painted it more as a dire Europa League match than anything else. A stinging shot from Suso would be well saved by Al Habsi as Reds probed for an early go-ahead and Wigan midfielder Ben Watson would be helped off the pitch after breaking his leg in a nasty collision with Raheem Sterling, though those were really the only item of note until the introduction of Jordan Henderson in the 36th minute. It’s unconfirmed as of yet whether the withdrawal of Suso was due to the Spaniard picking up a knock or not, but the introduction of Henderson would shift the match quickly into the Reds favor.

It was no real surprise that when the first half ended scoreless the natives began getting restless; though an early reprieve in the second half would be the perfect antidote to the Anfield malaise. Raheem Sterling had been troubling the Wigan back line all day with his pace and trickery and when a defensive error gifted him the ball, he’d provide the perfect cut-back for Suarez to slam high into the net.

Eleven minutes later, the Uruguayan would double his tally and open up a gap at the top of the Premier League scoring charts with his 10th of the season. Enrique held his nerve as he carried the ball through traffic and played the striker in through the center with a perfectly timed, impressively threaded pass that was almost as momentous as Suarez’s side footed finish past Al Habsi. If only to make the score line more emphatic, Jose would find the net for the first time since his move from Newcastle after Sterling and Suarez played a give-and-go that ended with Raheem lashing a shot on net. The Wigan ‘keeper would be equal to it, but he could do nothing about the rebound which the Spaniard put away with a flourish.

By the time the final whistle blew, the restless halftime crowd had done a complete 180 to end the day in a jubilant mood; the goals, the points, the win at home all played a big part, but for me, it was the decisiveness of Rodgers that made it all that much better. We saw it against Everton, then Chelsea and now against Wigan; the boss knows how to change the game. You rarely see a manager make any adjustments — ones that are easily recognizable anyways — until at least half time. Henderson’s runs would allow Allen more time at the back and Gerrard pushing forward would give the attack some extra impetus. More direct forward runs added extra pressure and allowed more bodies to find their way into the box; Rodgers saw an opening, a way to get a leg up, and he exploited it as quick as he could. To me, that’s almost as important as putting away three.

Scoring a Kop full always leaves a warm feeling in the stomach and with this being only our second league victory at Anfield this season, the kind of belief we need to push forward is beginning to stir up. Still, beating the Latics is one thing and we’ve got a tough run of games coming up with visits to the Liberty Stadium and White Hart Lane, so it’s not time to puff out our chests too far or get too loud. Seven games unbeaten is a great run, but unless we’re turning in results and climbing the table, we’re just spinning our wheels. If this is our jumping off point — and it very well could be — then I’ll be singing it from the hilltops in a few weeks time. For now, I’ll just smile quietly to myself and watch that second Suarez goal again. Grab me another drink, will you?