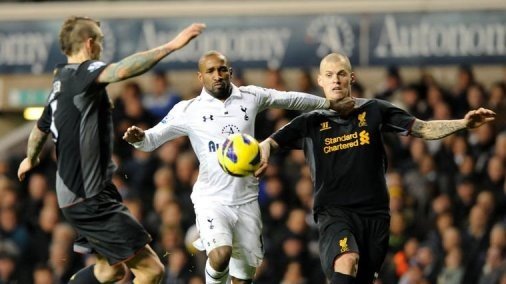 Two goals within the first twenty minutes left Liverpool reeling; first, Gareth Bale set up Aaron Lennon for an easy as you’d like tap in at the far post. The Welsh winger would find himself on the score sheet not long afterwards when a deflected free kick left Pepe Reina rooted to the spot.

It would be Bale that would put Liverpool back into contention for three points when Lennon cleared the ball directly into the wingers face, but the revenge we were all looking for wasn’t about to come. It seemed another cut and dry night — Liverpool failing to capitalize on chances and a number of inexplicable calls leaving the visitors ruing their bad luck.

It’s not even that Spurs were too good or the Reds were too bad; it’s just us continuing to be us. Flashbacks of last year’s 4 goal drubbing began to pop up as the hosts raced two goals in front, but the explosive opening twenty minutes would be the only real item of note for Villas Boas and the boys as the visitors once again fell victim to their own impotence in front of the net — with a little help from the Ref of course.

As we approach the New Year, it seems inexplicable that we’ve yet to win a penalty this season. In the first half, Steven Gerrard was blatantly shoved from behind by Kyle Walker after some neat interplay with Suarez snuck the England Captain into the box — without surprise, Phil Dowd ignored the resulting appeals. Switch to the second half and William Gallas is free and clear to hack and slash Suarez without reprimand or a sideways glance. Clint Dempsey can dive to win the free kick Bale converted and the Welsh Wizard — who after tonight leads the league in yellow cards earned for simulation — wins the plaudits. Frustrating and true, but still no real excuse.

52% of the possession, 9 shots on target and 12 corners; and not a single goal to show for it. Pick any match from this season, bar Wigan and Norwich, and already you know the story too well. A Suarez effort is cleared off the line, Enrique makes the wrong decision with Spurs ‘keeper Hugo Lloris at his mercy, errant passes, useless crosses — Henderson misses an empty net. Tottenham content to sit back and absorb the pressure knowing full well that the visitors haven’t overturned a deficit since last year and that even if we wanted to, we weren’t going to. Another night at the Lane, another trip home with nothing to show for it.

Sure, we had the late flurry. Jonjo Shelvey coming on for Jordan Henderson gave the midfield a shot in the arm and Oussama Assaidi replacing the wholly ineffective Stewart Downing added some much needed mobility as the Reds gave it a good one for the last twenty minutes or so. Still, the thin squad only gets thinner and fatigue is not only rearing its ugly head, but popping by for afternoon tea. Steven Gerrard played another 90 minutes, the usually sprightly Suarez seems to have lost a step, 17 year old Raheem Sterling is looking worse for wear and Joe Allen isn’t the player that showed so much promise in August. They’re tired and so am I.

Unbeaten in eight games, the security blanket we were clutching to for so long, just got left at on the bus; it’s gone and it isn’t coming back anytime soon. Southampton at the weekend and hopefully some shelter from the storm. Try as we might, we can’t make this long year end anytime soon.