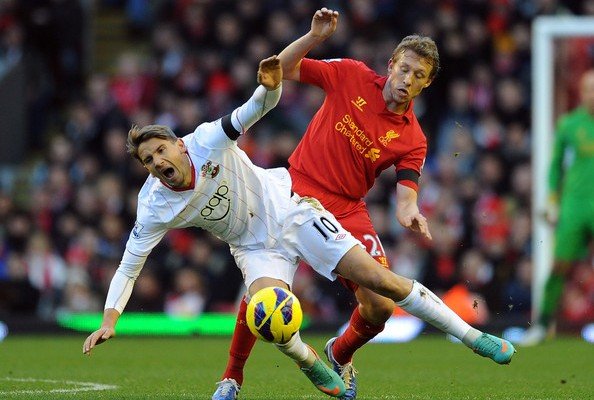 Analysis
December 3, 2012 Steven McMillan 5 Comments Brendan Rodgers, Lucas, Player Analysis, returns from injury, Statistics
Opinion has always been split on Lucas; either you see him as a pivotal cog in the Red machine or you think he’s complete and utter pants. You still might not be sure about the man Rafa brought to Liverpool from Gremio all those years ago, but many people, including myself, have changed what was originally a very sour tune.

He made a spectacular return in the summer after spending most of last season on the treatment table and hopes were high that this was the end of long road to recovery; unfortunately, it wasn’t to be. A three month lay off with a thigh strain suffered in the second match of the season sent the Brazilian back to the sidelines — that is, until the 1-0 win against Southampton yesterday at Anfield.

You’d be hard pressed to ask for a better return. Lucas put in a dominant 88 minutes yesterday and played the most passes out of any player on both teams with a total of 88 passes. When you consider that’s exactly 1 pass per minute and that he completed 86% of the them, it’s safe to say that he’s climbing back in the saddle again.

He was involved in everything; Lucas had 101 touches of the ball, which is more than any other player on either team. We’ve missed his defensive prowess when we were on the back foot and with an impressive 7 out of 8 tackles won along with 53% of his ground duels and 100% of his aerial duels, he was able to win the ball back 9 times — 4 in his own half and 5 in the midfield — which was a major boon to our cause. He also committed a team leading 8 fouls, though he never drew a yellow card for any of them.

His presence allowed Steven Gerrard and Joe Allen the ability to push, and sit, further up the pitch and both reaped the benefits of the Brazilians return. On occasions we’ve used Lucas as a launch pad for attacks; he breaks up the play and immediately moves the ball forward. Though his role is as a defensive midfielder, 52% of his passes were played in the attacking half and 13 out of his 88 passes played another player into the final third — a stat better than any of our more attack minded players.

Though he’s not quite up to full fitness, and he was caught out of position a few times, Lucas is well on the way to a full return — and we’re better for it. He’s the one player we’ve consistently missed, whether under Dalglish last year or Rodgers this year, we’ve been lacking that midfield bite that makes our game that much harder to break down.

Joe Allen has been a worthy replacement and the rightful heir to the throne — but he still has a lot to learn. Whether he’s pressing players wide, shepherding the ball through the middle, playing a quick pass up field or destroying what would have been a dangerous counter-attack, Lucas is boss. You may be one of the people who isn’t convinced yet, but rest assured, with performances like that, you’re in an rapidly shrinking minority.

Give some love to our friend @EPLindex in the Twitterverse. While you’re at it, we’re on there too — pop in and say what up.

5 thoughts on “Lucas vs Southampton: A Quick Look at the Stats”