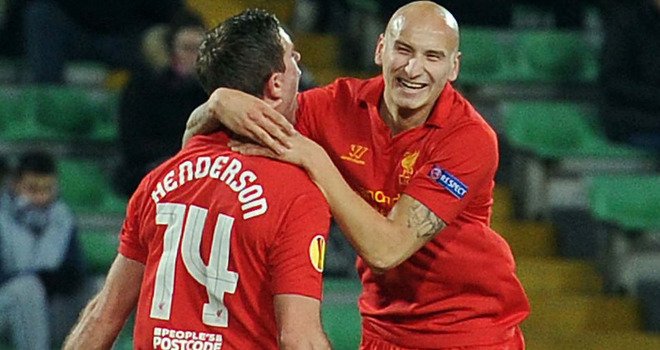 Europa League Match Reaction
December 7, 2012January 16, 2014 Steven McMillan 2 Comments 1-0 wins, Antonio Di Natale, Brendan Rodgers, Europa League Group Stages, Francesco Guidolin, Jordan Henderson, Luis Suarez, Stewart Downing, Suso, Udinese
A first half goal from Jordan Henderson was enough to see Liverpool past a poor Udinese side and into the Europa League Round of 32 on the top of Group A after Anzhi Makhachkala lost out to Swiss side Young Boys by three goals to one.

After being a nailed on starter last season, Henderson has found his chances limited under Rodgers, but the youngster has slowly been finding his way back into the side and rediscovering the kind of form that put him on Liverpool’s radar to begin with. Good work from Suso and Suarez lead not only to Henderson’s first European goal, but also some rare praise from the boss.

It’s goals that we need and anyone who can finish deserves all the plaudits coming to them. There’s been questions hanging over Henderson’s head ever since Rodgers came in; though his praise may be for a player who scored rather than a player he truly believes has a future in the famous Red shirt, it was nice to see Jordan get his rewards after some frustrating times.

“He is a great lad, works hard and has come in over the last month and made a good contribution. He has the quality to arrive in the box and a finish in him. His hard work is paying off. I’m delighted for him.”

It was a bit quiet in Italy tonight; with Udinese already on the outs, boss Francesco Guidolin wasn’t about to take any risks and leaving out talismanic striker Antonio Di Natale seemed to sap the energy out of the crowd. Going behind early, and in such emphatic fashion, surely didn’t help things.

The Reds took control of the match early; short, concise passes lead to a wealth of possession and the Zebrette quickly found themselves behind the kosh. A Stewart Downing corner was headed down by Suarez which found Suso in the box. The Spaniard and the Uruguayan were combining well throughout the opening exchanges and the youngster — keeping his head up all the time — found Jordan Henderson all by his lonesome. A nice as you’d like finish through traffic would wrap up his first goal in Europe and seal progression for the visitors.

It’s a rare occasion when Liverpool make things look easy, but the home side never did find their way back into the match. The Reds had the wealth of opportunities and Rodgers was loathe to see his side not to double their lead on a number of occasions. 59% of possession, 10 shots, 9 corners; the chances were there, we just predictably failed to finish them — and without an ounce of irony — were almost punished for it when Antonio Di Natale, introduced as a late substitute, fired over the bar with the final kick of the game.

A draw would have seen Liverpool eliminated after Young Boys won as well and there are some who would argue that going out of Europe wouldn’t have been a bad thing; that’s a conversation for another day though. The draw for the next round is on the 20th of December and this is where things are going to get real — both domestically and in Europe.

2 thoughts on “Liverpool (1) Udinese (0): Henderson Puts Reds into Knockout Round”