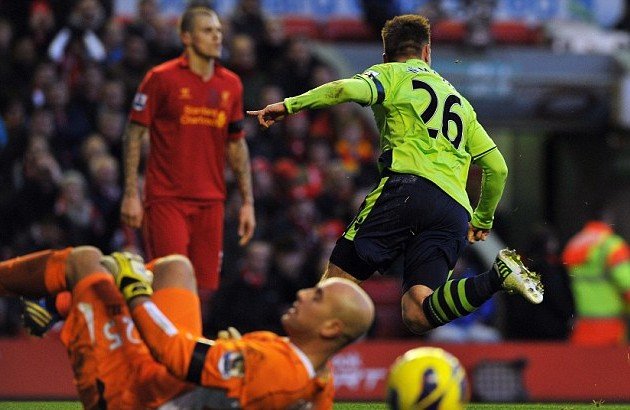 Match Reaction Premier League
December 15, 2012January 17, 2014 Steven McMillan 8 Comments 3-1 losses, Andreas Weimann, Aston Villa, Brendan Rodgers, Christian Benteke, Joe Cole, Jonjo Shelvey, Luis Suarez, Martin Skrtel, Paul Lambert, Pepe Reina, Steven Gerrard
Growing pains are the necessary evil of every side looking to find their way under a new manager; though its days like this when you wonder if it has to hurt this bad.

Aston Villa came to Anfield hovering just above the relegation zone with only their superior goal difference keeping them up. It’s now safe to say that the Villains will not be going down without a fight. Three quality goals on the counter attack shows the belief that Paul Lambert has instilled in his side as they expertly soaked up the pressure, only to explode and exploit on the counter attack. Wasted chances have been the story of the season and our inability to take them — this time within the opening minutes — was our downfall once again.

From the outset, we were met with a great Yellow wall. We had possession somewhere in the region of 61%, 26 shots on net and 7 corners, but Villa didn’t come here to chase the game; there’s a difference between playing hard and playing smart and Paul Lambert got an A+ in today’s test — his team are now unbeaten in five league matches.

It vaguely reminded you of Arsenal sides of years ago — defensively sound and quick to shift the ball into attack. The opener had a touch of luck about it when Belgian international Christian Benteke lashed a shot through traffic and past a screened Pepe Reina. Even after the opener, we didn’t look that bothered. With the way we were playing, it was only a matter of time before we leveled the score — then, they put us two behind.

It could come again after a period of sustained pressure when Villa finally found themselves with the ball again and Benteke held off Skrtel as he forced his way into box to play a picture perfect back-heel to Andreas Weimann. The Austrian came ghosting into the box unmarked and on the back of his double against Norwich on Tuesday, there’s no way he was going to miss this one. One goal behind is one thing, but two goals requires a sense of urgency. That extra push, that rise above moment unfortunately wasn’t about to materialize.

Joe Cole would find his way onto the pitch for Jonjo Shelvey at halftime, but the embattled midfielder’s swan song was sung at Upton Park last weekend as he failed to make any sort of recognizable impact. Rodgers called for consistency as his side went looking for their third straight Premier League win on the trot and the Ulsterman set his sights on a top two finish — both shouts seemed a distant dream when Benteke scored the visitors third to put the match well beyond reach.

Steven Gerrard deftly touching in Glen Johnson’s shot to pull one back three minutes before time barely qualified as a consolation. We had more chances then need to be mentioned — Suarez making a hash of a pass that would have saw the Captain through on net, Jonjo having the ball robbed off his foot with the goal at his mercy — and those were within the first 20 minutes. If you don’t laugh, you cry; I hardly feel like doing either.

It’s all a bit numbing; we hardly needed a reality check to keep our expectations on the ground. That’s where they’ve been for too long. In my preview I said we have to be ruthless at Anfield and we’ve failed to do that yet again. Top four — let alone top two — is out of the question until we can begin reaping results at home and finding the net with regularity. The January transfer window, which was massive to begin with, just got another spotlight added to its already illuminated specter.