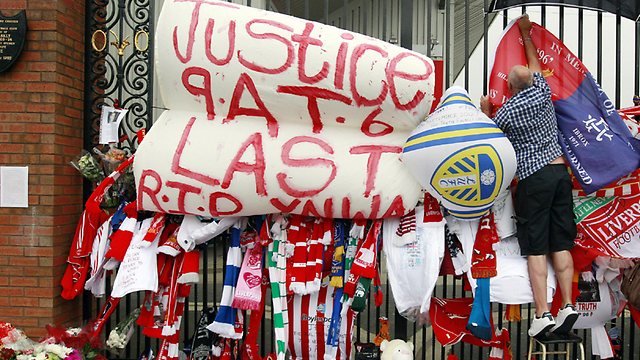 Editorial
December 20, 2012December 20, 2012 Steven McMillan 0 Comments Don't Buy the S*n, expose the lies before she dies, Hillsborough Justice Campaign, Hillsborough Stadium Disaster, Justice for the 96
Yesterday, the families of the Hillsborough victims took another step towards justice when the High Court quashed the verdict of the original 1990 inquest which ruled the deaths of 96 supporters as accidental.

It took 23 years, but there’s a real sense that justice is on its way after the findings of the independent Hillsborough panel proved that a massive cover up had taken place where police, politicians and emergency services personal went to great lengths to deflect the blame onto the supporters themselves. With the accidental death ruling overturned, the way has been paved for a new inquest — and it couldn’t have come at a better time.

Let’s get one thing straight: it’s been too long, but this is one Christmas present the families, the bereaved, and those who fought tirelessly for justice will never forget. A new inquest, to be scheduled for sometime next year, will re-examine the role of everyone involved and could very well lead to new verdicts of unlawful killing. The Home Secretary, Theresa May, has announced a new police investigation to be headed up by Jon Stoddart, a former Durham chief constable. There were 116 amendments made to the original police statements which attempted to muddy the waters regarding the role they played and with new evidence coming to light, the validity of the original inquest in Sheffield in 1990 was called in question.

However distressing or unpalatable, the truth will be brought to light. In this way, the families of those who died in the disaster will be properly respected. Our earnest wish is the new inquest will not be delayed for a moment longer than necessary.

A new inquest can’t come soon enough. Last month it was revealed that Anne Williams, the mother of Kevin Williams, who was lost in the tragedy, living on borrowed time with terminal cancer and may not live to see the culmination of her fight for justice. With the finish line in sight, it would be a terrible catastrophe to have her fall short after such a struggle.

To help pay for the legal fees of the families, a charity single has been released by a group of musicians calling themselves the Justice Collective which includes Sir Paul McCartney, Mel C and Robbie Williams among others. A cover of the Hollies He Ain’t Heavy He’s My Brother is currently in a fight for the Christmas time number one slot on the music charts and it’ll be giving the families a few pounds more with Chancellor George Osborne confirming that the VAT on it would be waived.

While we’re not quite there yet, justice has been coming quickly since the findings of the Hillsborough Independent Panel were first revealed. Yesterday was another important step towards the truth and a fight that seemed so slow it was in danger of petering out completely has now picked up the kind of insurmountable steam that’ now impossible to stop.

Haven’t heard the song? Haven’t bought the single? Click here to have a listen and peruse your buying options. It’s only a quid you cheap git.