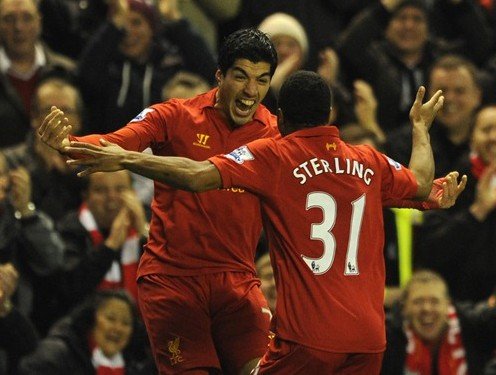 Luis Suarez’s second brace in as many matches came after a sublime chip from youngster Raheem Sterling opened the scoring, and by the end of it, Brendan Rodgers smiled all the way to the bank to deposit the three points with freshly minted signing Daniel Sturridge watching from the stands. In a way, it was a bit like our win against QPR at the weekend; we were as good as Sunderland were bad, but with the slow climb up the table slowly starting to pick up steam, keeping a rich vein for form going gives us much needed fuel for the fire.

Black Cats boss Martin O’Neal warned his players before the match that they would be coming up against a side that would punish them if they weren’t careful and it looks like they made the decision to throw caution to the wind. Defending with a high line was their first mistake and allowing Brendan Rodger’s side to build with little pressure was their second — and fatal — one.

With both Luis Suarez and Steven Gerrard combining well to both create and score goals, it was no surprise that both played a vital role in the opener. The Uruguayan would do well to control a pass from the Captain, but it would be even better when he lofted the ball over the defense to find Raheem Sterling. The pacey winger showed composure beyond his years to draw ‘keeper Simon Mignolet out of his net before unleashing a sublime volley to open the scoring and bring the Anfield faithful to their feet. With that Suarez picked up yet another assist, though it wouldn’t be long before he’d stamp his name on the score sheet as well.

The press have a field day calling him a diver but they’d be hard pressed to find anything wrong with his first goal. A foul by Carlos Cuellar out on the flank saw the ref play advantage when the Spanish defender slipped and instead of taking the easy foul and finding the floor, the Uruguayan would find the back of the net instead.

With the Cuellar only able to watch Suarez run clear, the striker would ignore both Henderson and Sterling — both better placed for a pop at the net — before beating Mignolet with the kind of shot that was audacious enough that not even luck could keep it out. Both Steven Fletcher and James McClean would threaten for Sunderland before the half closed out, but Pepe Reina would be more than equal to anything the visitors threw at him and when Adam Johnson’s cross found Matthew Kilgallon looking to pull one back, the fullback would be surprised to see his volley blocked by the Spaniard as he kept his sheets impeccably clean.

Jordan Henderson would do the simple things well in the advanced midfield role, Lucas reminded us why we missed him so bad during his injury lay-offs and Steven Gerrard continued to prove the doubters wrong with the kind of display that made him a living Liverpool legend. The Captain was involved in the buildup to the first two goals and there was no reason to shake things up for the third; a laser accurate sixty yard pass exploited the gap between Sunderland’s defense and miraculously found Suarez. The Uruguayan would split Craig Gardner and Carlos Cuellar before rounding the ‘keeper to slot home his second of the night and put the match out of the visitors reach.

The hat-trick would go begging for Suarez and both Glen Johnson and Joe Allen — on for Sterling early in the second half — would be denied the opportunity to turn the rout into a massacre, but there wouldn’t be any complaints coming out of the Kop. Liverpool are up to eighth place and have now recorded back-to-back league victories for the second time this season. Two wins on the trot, back to back clean sheets and six goals split between the two matches against two teams we should be beating? Works for me.

Got something to say? Have a go in the comments or find us on Twitter and Facebook. We’ll be knocking around here somewhere.