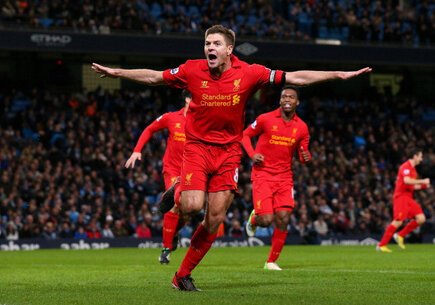 A dominate performance against Arsenal ends with the teams splitting the points and it’s more of the same against Manchester City today. Edin Džeko put the home side ahead after latching onto a James Milner cross, but their former striker Daniel Sturridge would restore parity under controversial circumstances after the ref tells the players to play on after a Daniel Agger foul isn’t given. A wonder strike from Steven Gerrard would give the visitors a deserved lead before Sergio Aguero would match the magic with an incomprehensible half-volley from an improbable angle with Pepe Reina stranded.

This is the second time this season that we’re able and more than willing to go toe-to-toe with the Champions; David Silva would fire the opening salvo with a dipping shot from outside the box within first minute to set the tone for the rest of the match. Chances would come in quick succession for both sides as a super ball from Glen Johnson goes over top of the City defense and onto the foot of Daniel Sturridge. The control was almost as good as the pass and quick as a flash their former youth player is rounding Joe Hart to tap home, only for stand in skipper Pablo Zabaleta to block his goal bound effort.

A minute of applause at the ten minute mark for former City great Neil Young rang out around the stadium as both sides continued to trade blows and during a good spell of possession for the Reds, the Citizens would take the lead. Edin Džeko was plowing a lone furrow up top and with the Brendan Rodgers encouraging his players to pressurize high up the pitch he was becoming increasingly isolated until James Milner capitalized on a Glen Johnson error to flash a low cross across the face of goal. The ball eluded everyone except for Džeko who was on hand to poke past Pepe Reina.

Liverpool have yet to win a match this season when they’ve conceded first; that didn’t seem to matter in the least as the Reds looked for an immediate response — and got one — through Daniel Sturridge. With Džeko laid flat out by Daniel Agger, referee Anthony Taylor saw no reason to stop play. Playing the whistle, Liverpool continues to pile on the pressure and with nine men behind the ball, the Reds look for the kill. Javi Garcia, playing an unfamiliar role as a holding midfielder, fails to clear the ball and Steven Gerrard would put it on a plate for Sturridge to smash home from the top of the box past a hapless Joe Hart.

Although City will feel aggrieved not to be given the foul, it was hardly a surprise when the Bosnian, who appeared to be in great pain only a moment earlier, popped up to his feet to earn himself a yellow card for his ensuing protests. Sturridge, who stayed cool as can be to not celebrate an outstanding effort, showed his the kind of impact Brendan Rodgers was hoping for and is the first player to score on the road at both the Etihad and Old Trafford since Kenwyne Jones three seasons ago.

As the half wore on — and the second began — Liverpool continued to pile the pressure on their hosts and without the calming influence of Vincent Kompany or the industry of Yaya Toure, Brendan Rodgers employed a somewhat unexpected tactic as a number of long balls flew up the pitch and into the space Luis Suarez and Sturridge created with their ceaseless runs forward. Although not all of them were accurate, or dangerous, each asked a question of the unsettled rear guard that was looking increasingly ripe for the picking.

Jordan Henderson, one of standout performers at the Emirates midweek again turned in a good shift and when he played Jose Enrique on the overlap to drive a cross into the box, the go ahead goal was about to plucked from the tree in spectacular fashion. Gaël Clichy could only half clear the cross as far as Steven Gerrard who, as he’s done so many times before, unleashed an unstoppable shot from twenty-five yards out that Joe Hart couldn’t have hoped to save. The England captain has a long history of pulling Liverpool ahead under the most improbable of circumstances and this looked to be his defining moment of season filled with the kind of performances we’ve come to expect from our talisman.

With Liverpool firmly in control, it looked to be only a matter of running the clock down until a rush of blood to the head sent Pepe Reina on a suicide mission.

Although Martin Skrtel, on for the tiring Jose Enrique, was tracking Sergio Aguero and looked to have the Argentine contained, Reina came sprinting out in an attempt to force the striker wide. With his ‘keeper handling the situation, Skrtel laid off to track Edin Džeko who was moving into the gap created in the confusion. As Pepe trained to put in a tackle, Aguero would create a moment of pure beauty; without looking up to see where the net is, the Argentine hit the ball on the half volley from what looked to be an impossible angle. Although the goal keeper was outside the net, not a single Liverpool player went to cover the line for him and as the ball sailed across the face of goal en route to the bottom corner, the players — and everyone in the Etihad — could only watch slack-jawed as the score was leveled.

Maicon would be denied as dramatic winner for the hosts when he headed agonizingly close and Daniel Sturridge — who put in an obvious Man of the Match performance — could have scribbled an indelible mark on proceedings had his twenty yard strike beaten England team mate Joe Hart in the final minutes, but the three points would be split between the two teams and only one of them could feel truly aggrieved at that.

If you’re feeling a bit hard done by, you’re not the only one. Draws against the likes of Manchester City and Arsenal for our still green side are good results and a great jumping off point for our next run of matches — still, having what looked to be two fine wins turn into a pair of draws is bitter medicine no matter which angle you choose to look at it from. Still, it’s not the kind of thing the squad, or the fans for that matter, should be dwelling on.

In the space of two matches, we’ve turned around what was a poor showing against Oldham in the FA Cup and put in a pair of performances we can be proud of. If we can take the game to the likes of Arsenal and Manchester City, we can begin finding those wins that we’ve been lacking against the likes of West Bromwich Albion — who travel to Anfield next Monday — and Swansea, who we’ll meet the following weekend. We’ve seen what this squad can produce and it’s good; the time for excuses has passed. Points need to be put on the table and the result today — though a tad disappointing in the end — has shown that we’re more than capable of doing it.

Are you thinking of doing some online betting on an Liverpool FC fixture? Why not come and check out the latest betting tips and odds at https://www.bwin.com today.

Am I off the mark? Is it all Doom and Gloom or do you have another take on it? Let us know on Twitter, Facebook, or in the Comments section below; or, you can call me an idiot on your favorite Social Media site. It’s nice to know you’re thinking of me…