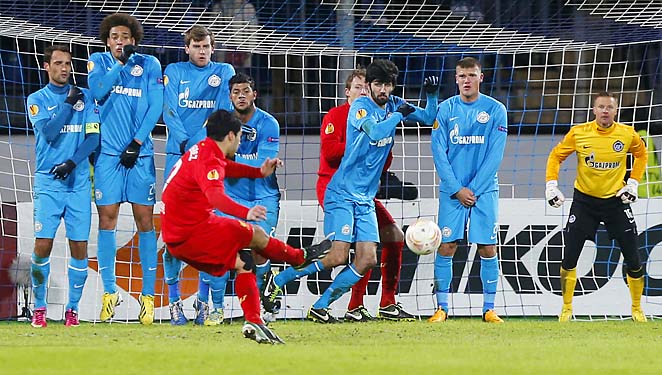 Europa League Match Preview
February 21, 2013February 21, 2013 Steven McMillan 1 Comment Brendan Rodgers, Europa League Round of 32, Hulk, Luis Suarez, Pepe Reina, Raheem Sterling, Sergei Semak, Zenit St. Petersburg
Zenit St. Petersburg comes to Anfield with one foot planted firmly in the Round of 16; a 2-0 defeat at the hands of the big spending Russians at the Petrovsky Stadium just under a week ago has left Liverpool with a mountain to climb if they’re going to pip their guests to what looks to be a foregone conclusion.

The 5-nil thrashing of Swansea on Sunday will buoy spirits ahead of the this all important Europa League clash and if the rout was enough to lift Brendan Rodgers side out of their unenviable funk, then the Everest sized task at hand may soon be reduced to something far more manageable. It’s not like the Reds, and their fans, don’t have some experience in the turning around deficits department.

While the amount of effort that should be put into the Europa League remains a polarizing topic among Liverpool supporters, it remains our last chance for a piece of silverware this season. Our Champions League hubris causes us to heap scorn on this second tier competition — even if this is exactly where we deserve to be. As we spend our time devaluing a competition that keeps us relevant, those of us that have no interest in progression to the Round of 16 may get their wish very shortly.

In the first leg, Hulk smashed his way to the opener with a ground-shaking effort and Sergei Semak heaped on the pressure by doubling up only two minutes later; if we are going to weasel our way into the next round, we’re going to have to make sure we’re not making the same mistakes that made the reverse fixture such a disappointment. Our game of keep-away failed miserably as we continually and cheaply gave away possession, chance after chance was wasted as our attack fizzled out and we looked vulnerable every time we were put on the back foot.

With both Daniel Sturridge and Philippe Coutinho cup tied, we’re going to have to make things work without them. Raheem Sterling and Jordan Henderson are likely to come into the side to replace them and though that may mean a shift in formation, if they can replicate the kind of darting runs that gave Luis Suarez both the room and time to work his magic, this just might work.

The Uruguayan put in a Man of the Match performance on Sunday, but the fitness of our talismanic striker, as well as many other members of the squad, is becoming a concern as we stare down the barrel of our 4th match in eleven days. Steven Gerrard has play every minute of every Premier League match this season, Lucas is still finding his feet after his extended injury layoffs, Fabio Borini is out for the remainder of the season, Raheem Sterling is still just a kid and Jamie Carragher, who’s found a new lease on first team football in what’s to be his final season, remains questionable after chalking up a serious amount of minutes over the last ten days. If you couple that with the inconsistent streak that’s been the bane of our season, that two goal deficit may be the least of our worries.

We’re going to have to score first and score early; Rodgers believes a “frenzied atmosphere” can be crucial in spurring the team forward and it’s hard to argue with that logic. The legend of the Mighty Reds was built on European success stemming from nights like these. Though this might not be the pinnacle of European competition, we need to give a serious push in, if not win, competitions like this if we’re going to give the youngsters the kind of experience they’ll need for the big stage and keep the rest of the squad — namely Luis Suarez and Pepe Reina — dedicated to the cause. Spending a Thursday night with the Champions of Russia? I can think of worse ways to spend the evening.