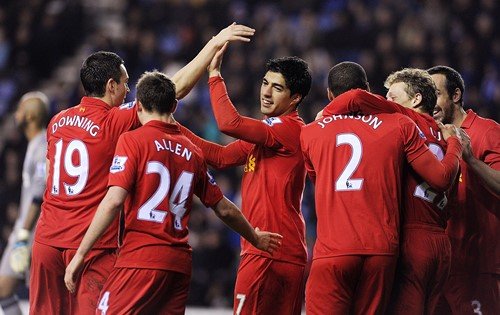 If he was boasting serious player of the year credentials before the meeting with the Latics, taking the pole position in the race for the Golden Boot will only further those ends. We were left to lament a lack of finishing last season from not only the Uruguayan, but from the remainder of the side as well; though those problems seem to have abated — for the time being anyways — with the Reds finding the net 12 times in their last 3 matches. This would be Liverpool’s first win at Wigan since 2007 and despite not putting in the best performance, the ruthlessness Suarez showed in front of net was exactly what the travelling Kop ordered.

Video by the fantabulous @MrBoywunder

Despite the plaudits being doled out, Suarez didn’t have one of his better games – by the numbers anyways. The striker could only complete 67% of his passes and though 68% of those passes were played in the attacking half, the large majority of them were played to players behind the striker. Though he wasn’t the only wasteful player on the pitch, he lost possession 19 times in his 90 minutes on the pitch. Thankfully, he found ways to make up for it.

There were times in recent memory when Liverpool put 25 shots on net and couldn’t find the back even once; whether it was the opposition goalkeeper putting in the performance of their career, the woodwork doubling in size or terrible luck conspiring to keep the score line down, we got no joy in front of goal. That was certainly not the case on Saturday; El Pistolero took only 4 shots – 1 shot every 22.5 minutes — and each of them were on target. We’ve learned the hard way that if you’re not hitting the target, you’re not scoring and this was never more evident than Saturday when 3 of his shots found their way past Ali Al-Habsi — including his 5th goal from a direct free-kick this season.

The hat-trick makes it 21 league goals and counting for the man from Salto, Uruguay and an astounding 28 for the season when you factor in the FA Cup, League Cup and Europa League. Although the season is beginning to wind down, he’s still got 10 matches to bag another 7 goals and equal Robbie Fowlers record of 28 for the season. Back in August it might have seemed like a pipe dream for him to reach those heights. We knew he was good, but I don’t think anyone imagined that in March he’d be within shouting distance of hitting – or even exceeding – that lofty target.

Video by our homie @MostarLFC

After the match, Brendan Rodgers is quick to point out how much Suarez loves the city of Liverpool and the fans that sing his name with gusto each and every match – whether he’s scoring hat-tricks or flipping Fulham fans the bird. He also laments how it would have been so easy for him to leave us behind in the summer, but he instead decided to sign a new contract and tie himself to the Reds for the foreseeable future. This process could very well be repeated this coming summer.

Though the boss is confident that Suarez believes in his plan and wants to be a part of what’s growing on Merseyside, the lure of shiny trophies and playing at the top level has broken the resolve of lesser players; reported interest from clubs all over Europe with Champions League football on offer could make for a long transfer window and Fenway Sports Group will be looking to secure their assets while Rogers is out farming for new recruits. The addition of attack minded players like Philippe Coutinho and Daniel Sturridge during the January transfer window has lessened the burden on the Uruguayan and will go a long way in showing that the boss, and the owners, are serious in their ambition Now it’s just a matter of realizing it and seeing our Luis in Europe’s showpiece competition within the next season or two – playing in the Red of Liverpool, of course.

These posts wouldn’t quite as good without the hard work of the LFC community. Give @MrBoywunder, @MostarLFC and @EPLIndex some love in the Twitterverse.