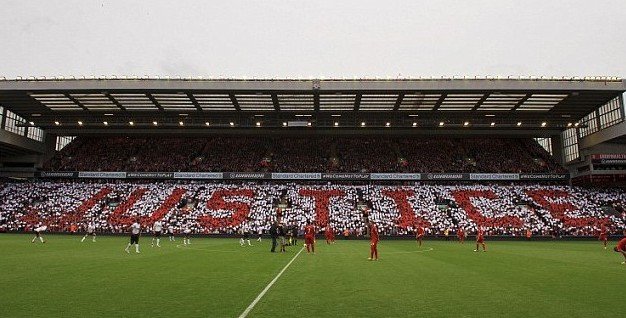 It’s been 24 years since the horrific events of April 15th, 1989 shaped the future of both Liverpool football club and football as a whole. The grisly scenes that would unfold during the Liverpool’s FA Cup semi-final match with Nottingham Forest would resonate out across the years; the resulting cover up by the South Yorkshire Police, the complicity of the Thatcher government, the slanderous lies perpetuated by the S*n newspaper — all were key factors in the and the fight for justice for the 96 fans that lost their lives that day, but none were more important than giving a measure of closure to the families themselves.

For the past 23 years, this would be where the story would end; a call for a new inquiry and a review of the blatantly clear facts that have been available for all to see since almost the beginning — not today though — now we have a different tune to sing.

It’s been a year that few Liverpool fans will forget. Though our performances on the pitch have been spotty, a war that we’ve been waging for 24 years is drawing to a close. In September, the results of the Independent Hillsborough Review Panel unequivocally laid the blame for the disaster at the feet of the South Yorkshire Police and other agencies that not only failed to save the lives of 96 people they were sworn to protect, but had the audacity to lie about the events to save their own necks.

We’ve always known better than to believe it. There were no phantom ticketless fans. There were no drunken yobs running amok. The Liverpool supporters were not hampering the rescue efforts or fighting amongst each other. The hoax perpetuated by the police and glorified by various news sources has once and for all been torn down and exposed for what it is and always has been: lies told by cowards with no regard for the grieving families they devastated.

Justice is coming though; you can count on that. As the club holds the memorial service and countless fans pay their respects — both on and offline — the fight for justice continues on. The families have those responsible and complicit in the tragedy and resulting cover-up in their sights and nothing will stand in their way. If they can overcome 24 years of being told to “just be quiet” and that they were “sniffing up the wrong tree” only to be proved right, what can possibly stand in their way now? Justice has been anything but swift, but when the time comes it will be righteous and hopefully, it will give a modicum of comfort to those that have kept a candle lit for far too long.

2 thoughts on “24 Years Later, You’re Still On Our Minds”