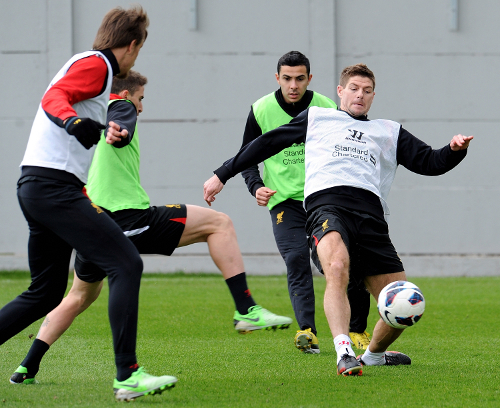 Match Preview Premier League
April 26, 2013 Steven McMillan 1 Comment Alan Pardew, Brendan Rodgers, Daniel Sturridge, injuries, Luis Suarez, Newcastle, Papiss Cisse, Tim Krul
Liverpool have given Luis Suarez the option to appeal his ten match ban for biting Chelsea defender Branislav Ivanovic in last weekend’s 2-2 draw at Anfield, but while we wait for the will he or won’t he confirmation, the world keeps turning and the Reds visit to St. James Park on Saturday is quickly coming into a sharp focus.

If you forgot that there’s a match on Saturday, you’re already forgiven as you’re not the only one; the media have been relentless in their coverage of this latest Suarez debacle that even Prime Minister Cameron — lily white as he is — has felt the need to weigh in on this pressing matter of national importance. Story saturation, and rank stupidity, aside, we’ve got other things to talk about now and having the Reds rack up three points on the road would be splendid indeed. After three draws on the trot, we could certainly use a little joy.

It’s hard to say it, but any European aspirations we had are pretty much sunk now. We’re sitting ten points off a European place and with only four matches remaining in the campaign; it’s looking like a bridge too far. If that’s not bad enough, we’re a full five points behind cross town rivals Everton and even though they’ll be at Anfield the following weekend, thrashing them may not do us any good. It’ll feel good mind you, but for some reason they don’t hand out extra points for beating the Toffees.

Before we can even consider glory in the derby, we have the Magpies to deal with and doing it without Suarez could prove tricky. The Uruguayan scored a Goal of the Season candidate in the reverse fixture when he controlled a long pass from Jose Enrique with his shoulder before rounding Tim Krul to draws his side level. With 30 goals in all competitions this season, he’s going to be a big loss and Newcastle defender Massadio Haidara couldn’t express anything but relief that the talismanic striker would be missing out.

“He is definitely the difference for Liverpool. Without him, they will be a different team”

Appeal or no appeal, Suarez won’t be hitting the field this Saturday, but he’s not the only trick up Brendan Rodgers sleeve. Philippe Coutinho, who’s created waves since his January move from Inter Milan, is sure to start and Daniel Sturridge, who came off the bench to score against his former side last time out, looked like a live wire. The striker coolly finished past Petr Cech as the Reds cancelled out Oscar’s first half header and the former Chelsea man was unlucky not to have a brace with an earlier long range effort cannoning off the post. Haidara may be happy not to line up against Suarez, but facing Sturridge won’t be much better.

After a bright start to the season, Newcastle are currently hovering only six points clear of the relegation zone, having played one match more than 18th placed Wigan. Injuries have hampered Alan Pardew’s side and there are fresh doubts over Papiss Cisse, Tim Krul, Cheick Tiote and Sylvain Marveaux going into Saturday – hardly the kind of news you want when Liverpool are about to come knocking at your door. Brendan Rodgers side have claimed points in seven of the last eight matches and with proceedings quickly winding down, the Magpies could find themselves mired in a relegation scrap before long.

It’s been confirmed that Reds captain Steven Gerrard is likely to require surgery on a shoulder injury this summer, but he’ll be there to lead the side out on Saturday and St. James is a place he’s always enjoyed scoring goals at. We could use to some trademark Stevie magic to lift some of the black clouds currently hanging around the club – three points against Newcastle has a way of making the sun, if only metaphorically, come out.

One thought on “The World Keeps Turning: Newcastle Preview”