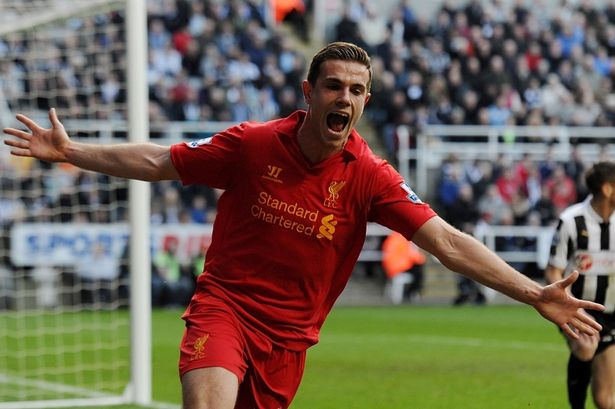 I was lucky enough to be offered a ticket for the Newcastle game and after pondering for about 10 seconds as to whether I should go, I gleefully accepted. I am so glad that I did…..

The 3.5 hour drive from the North West was a journey filled with laughter, jokes and banter with the result actually having very little bearing (or so we thought) on the remainder of our season. Discussions as to whether Daniel Sturridge would ‘step up’ and/or whether Newcastle would ‘react’ following their recent trouncing by their NE neighbours Sunderland.

We arrived in good time and frequented a bar that was ‘male orientated’ in regards of the entertainment provided! Happy days. A couple of beers later and we were heading to the impressive St James Park. The climb up into the away end required oxygen such is the height of the stand. It really is very very impressive. We were greeted in the bar at the top by ‘well oiled’ fans who were all determined to have a good day out ‘no matter what’. Little did they know what was coming.

I can only describe the next 90 minutes as utterly brilliant. Liverpool absolutely battered Newcastle in every single department. 1 up after a couple of minutes through Daniel Agger, then 2 up following some brilliant football orchestrated by the impressive Phillipe Coutinho, aided by Sturridge, and finished with ‘ex Sunderland players’ glee by Jordan Henderson. The travelling Kop were in dreamland and enjoyed ‘baiting’ the Newcastle fans who were already leaving the stadium with little more than 20 minutes played. Good job our fans stuck around in Istanbul!

Newcastle missed a ‘plated up’ chance by James Perch and that was the first half done. Utter doiminance by the might redmen.

To be fair to Newcastle and after a couple of substitutions, they started the 2nd half a lot more positive and created a couple of chances. If they had scored one of them it may have been a different match, but they didnt. The third was only a matter of time and it duly arrived following a magical run and pass by Coutinho, allowing Daniel Sturridge to fire into the net. Cue ‘Wriggly arms’.The fourth followed soon after when Stevie released Jordan Henderson free down the left hand side his cross was met and despatched by Sturridge for his deserving second of the game. And that was that. Newcastle simply crumbled, and the red machine crushed all in its path with a briliant display of football aided by the ‘unsung’ performance of Lucas, who had a great game doing the ‘simple stuff’.

It was only a matter of time before we scored our 5th goal, and it was a rare sight to see Fabio Borini celebrating in front of the ecstatic reds fans with his first touch of the game. To be fair to Fabio, it was an excellent finish and the emotion he showed following his goal was great to see.

A Newcastle red card, a 6th goal from an ‘untouched’ Henderson free kick and a mazy run and crossbar strike by Coutinho settled the game with Liverpool fans dancing the conga through the stands and turning the air red as red smoke bombs were let off. It was a proper party in the away end.

Make no mistake, Newcastle gave us the space to play, but did we play. This was an absolute battering and without a shadow of a doubt finished off a terrible week for all associated with LFC in the best manner possible.

Phillipe Coutinho, Daniel Sturridge, Jordan Henderson and Lucas Leiva personally deserve special praise for their performances and if such performances can be replicated on a consistent level, I actually am starting to believe that my beloved club are going to be alright.

Next up is Everton in a match that is eagerly anticpated here in the North West. If we come close to the Newcastle performance, Sunday May 5th could be a beautiful day. We can only hope and pray……….