After a legendary career with Liverpool, Jan Mølby turns to the poker tables to create another legacy

The Anfield pitch has been called home by some of the best football talents the world has ever seen. The fresh scent of its grass emanates from its adoring fans and their one of a kind passion for the game and its players. When it comes to their favourites, the Red faithful always has something to say. 121 years and counting, the spirit of these so-called “Legends” of Liverpool live on in the field with their sheer tenacity and the pride they’ve brought to a prestigious club. However, only one Liverpool legend stands out amongst them, not only for his world-class football game, but also for his smooth transition towards becoming a high-calibre poker player. Danish midfielder and former Liverpool great, Jan Mølby, evolution from the field to the felt seemed to be a natural progression. 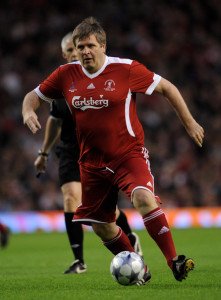 Having been immortalized by the Liverpool loyalists for his involvement on some if the best and most feared line-ups in the past; Jan Mølby surprisingly decided to take a
different direction after hanging up his cleats for good. He found an outlet for his competitive streak in some of the most dangerous poker tables throughout Europe. From a diverse field of opponents that ranges from Partypoker.com online qualifiers, to European Poker Tour mainstays, Mølby impressively held his ground and confidently went toe-to-toe against the more accomplished players. The similarities between poker and football may seem shallow, but the important aspects of winning in both games stem from a player’s patience, preparation, and focus – qualities which are present in Jan Mølby’s character. The unique fascination that poker presents grabs the attention of adrenaline-craving athletes who are looking for an effective way to transfer their competitive aggressions from their respective sporting fields to the poker tables. And amongst all the athletes-turned-poker-players, the Danish football legend probably had one the most successful poker debuts after he cashed in on his first European Poker Tour in Copenhagen. Mølby raked in a sweet pay check of 55,000 DKK after placing 45th from a starting field of 299. Though he is still hundreds of miles away from being considered in the same atmosphere as poker greats like Phil Hellmuth, Phil Ivey, and compatriot Gus Hansen; Jan Mølby completely understands that as a 50-year-old “newcomer,” he still has a lot to improve on and more importantly, he’s willing to bite the bullet and compete away from his comfort zone.

In poker, it is important to grasp the simple fact that the game is more about playing – and reading – opponents rather than the cards involved in a hand. One has to pick the right time and circumstance to make a play, because one false move can lead to disaster. Jan Mølby has the qualities of a high-level poker player. And as he unlocks his full potential in the game, Liverpool fans might have another reason to cheer, only this time they’ll do it while watching the EPT or other major tournaments in the world.