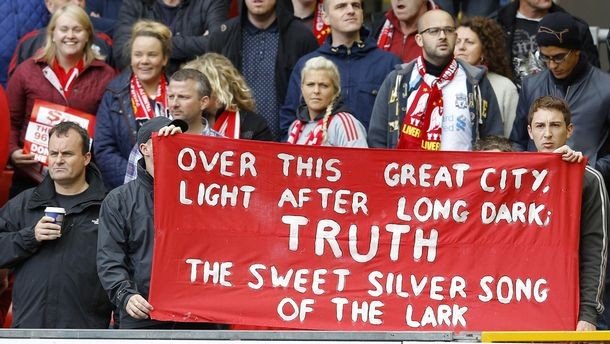 Editorial Feature
September 12, 2013September 12, 2013 Steven McMillan 0 Comments Hillsborough, Hillsborough Independent Review Panel, Hillsborough Stadium Disaster, Justice for the 96
September 12th, 2012 will go down in history as one of the most important days in on the Liverpool football club calendar. It may have taken close to 23 and a half years to arrive, but the world finally knows the truth about what happened at the Hillsborough stadium on April 15th, 1989.

As 96 men and women lost their lives and one of the biggest police cover-ups in the history of Britain kicked off, so did the fight for justice and it was one year ago today that the families, the friends and the campaigners for the truth were granted the ultimate vindication when the Hillsborough Independent Panel released their findings to the world: they were right all along. Now, one year on, the culpability of not only the security staff and the South Yorkshire police, but the Football Association, Sheffield Wednesday football club and the Sheffield City Council are being investigated.

Justice for this wholly avoidable tragedy is truly on its way.

Jon Stoddart, former chief constable of the Durham force and one of the most experienced detectives in Britain is heading up the investigation and speaking with the Guardian on the anniversary of “Truth Day”, he confirmed that all parties were being investigated for possible gross negligence manslaughter. “We are looking at unlawful killing; who is responsible for the deaths. Those 96 people went to Hillsborough to watch a football match and didn’t return home” said the detective.

It’s been confirmed in the findings of the Hillsborough Independent Panel (HIP) that 41 of the 96 people who lost their lives that day could have been saved with adequate emergency services response, and in the wake of the tragedy, that over 150 police statements were altered to cover up what had happened. This number, unsurprisingly, continues to rise as the investigation continues. While the role of security services has long been pointed to as one of the major factors leading to the fatal crush, Stoddart also confirmed that his team would be looking into the role the stadium, as well as other forces, played.

It’s been widely reported that the Hillsborough Stadium, which the FA had quit using a semi-final ground in 1981 after a crush occurred in a match between Tottenham Hotspur and Wolves, did not have an in-date safety certificate. As the investigation continues to widen in scope, detective Stoddart said “…clearly it is about more than just command and control and what happened with the emergency services’ response. It is about the safety of the stadium, certification, the planning and preparation, the engineering and design that went into the Leppings Lane end.” Even after the ground was re-instated as a suitable venue in 1987, an up to date certificate was not obtained – a responsibility that falls on Sheffield City Council.

Paisley Gates contributor and practising Health and Safety professional Mark Ashley wrote a piece last year, which he also touched upon earlier today, about the culpability of both the FA and the Sheffield City Council as both violated the Safety of Sports Grounds Act of 1975 which states that any sports ground which accommodates more than 10,000 spectators must have a safety certificate. It goes on to say that it’s the duty of the local authority to enforce it and that a periodical inspection of the ground – once every twelve months – must be conducted.

While the responsibility for the stadium itself ultimately falls on Sheffield City Council, the gross incompetence of the FA to re-instate a ground without a valid safety certificate cannot be ignored. The more than 450,000 documents released and examined by the HIP shed light on the numerous safety concerns and failing of the Hillsborough stadium as a whole. As we know, the original investigation resulted in no charges being laid against any organization or individual – something that will surely change as the investigation continues.

It’s been more than 24 years since the Hillsborough Stadium Disaster played itself out on television screens across the world and one year since the truth was finally revealed; it has been a long time coming, but progress is being made.”It is not about whether you are a police officer, a member of the council, or Sheffield Wednesday or the FA, the families deserve this issue to be investigated to the highest possible standard, with the best rigour and the most professional skills and abilities we have in the service” said detective Stoddart, who continued “That is what we have to do. Whether they are police or not, doesn’t matter to us.” For those that have spent so long fighting for justice, those are exactly the kind of words that soothe the soul.