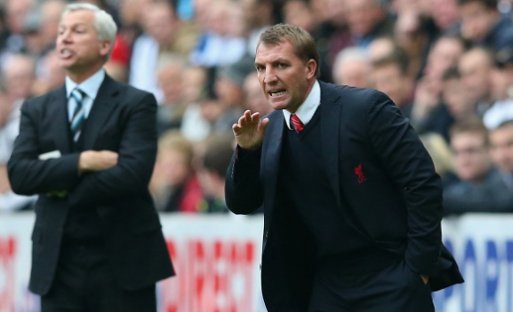 Analysis Feature
October 20, 2013October 21, 2013 Steven McMillan 0 Comments 2-2 Draw, Analysis, Brendan Rodgers, Newcastle United, post-match interview, Statistics, stats, video
“It’s a point that we’ll hopefully look back on at the end of the season and say is a good point having been behind twice” said Brendan Rodgers following Liverpool’s draw with Newcastle United yesterday and it’s hard to argue with that.

It was a match filled with positives, though you get the sense that it was more points dropped than gained as the Reds failed to capitalize on a host of opportunities to build on their previous performances against Crystal Palace and Sunderland. Rodgers tends to agree. “I just felt it was one of those games where we couldn’t quite make the breakthrough, but everything that the players put into the game was exceptional” said the boss and the stats back that up.

It was nice to see the Reds continue to find the net with regularity — and score in the second half, but despite finding the net twice, we conceded pair which included yet another set-piece nightmare.

We created a staggering 19 chances yesterday, which is far better than our average of 8 chances per match leading up to this, but could only manage 38% of our shots to actually cause Magpies ‘keeper Tim Krul any bother; in our previous 7 matches, we were much, much better with an average of 60% of our shots finding the net.

Besides the Captain scoring from the spot, we saw 1 assist yesterday when Luis Suarez crossed for Daniel Sturridge to head home, and 18 key passes played. The Reds saw 56% of possession, which is better than our average of 52% over the previous 7 matches and this bump could be attributed to our 85% pass accuracy — bettering our average of 81% and including 36 out of 38 long balls being completed for an average pass length of 18m.

Leading up to this match we were winning an average of 54% of our duels and we saw a slight increase in that yesterday with 56% of duels won. Newcastle, despite scoring 2, wasn’t much of a threat going forward and even though we didn’t have Lucas in the side, we were successful in 12 out of 15 attempted tackles and were strong in the air, winning 19 out of 33 our headed duels.

With Newcastle reduced to 10-men following Mapou Yanga-Mbiwa’s sending off, it was disappointing not to see Brendan Rodgers shuffle his pack to take advantage of their numerical superiority and to fall behind again. “We conceded from a set-piece against Crystal Palace and it took a wee bit of the gloss off the performance. Today we could do better” said the Northern Irishman. Not only did they concede with an extra man on the pitch, it was another set piece that did them in.

“The second goal was a mistake. We just lost our man and he’s nipped in and finished it really well. These are goals that we can avoid, for sure” said Rodgers and he’s certainly not wrong. Southampton, Crystal Palace and now Newcastle have all found the back of the net this season through deadball situations with our frailty on display each and every time. Still, the boss spent most of the time focusing on the positives rather than highlighting the obvious negatives.

Level on points with Chelsea for second place and only three points off Arsenal at the top, the Reds are looking like decent contenders for Champions League football this season. “We are disappointed not to get all three, but to come back twice I think the point was the least we deserved. We are on the right path and this point could be important at the end of the season” enthused Rodgers. It’s eight matches in and we’re keeping pace; we spent the early season dampening expectations and though no one is planning a parade quite yet, our league position is starting to feel more like reality than early days fantasy.

Got something to say? Let us know what you think about the Reds form in the comments section; or, you could always find us on Twitter or Facebook. We’ll be there watching videos of cats and providing mundane status updates…