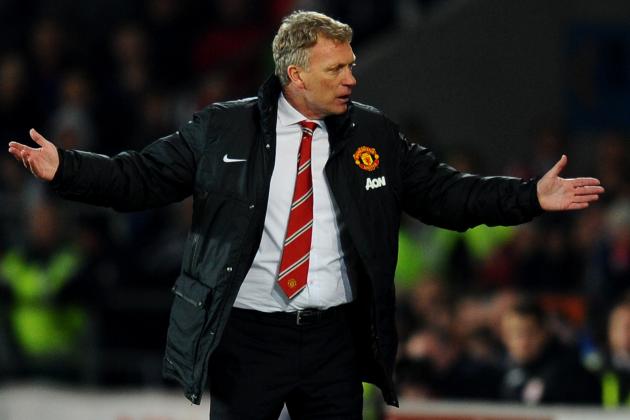 Has he stayed with former club Everton and had they picked up 48-points from their first 28-matches, the Scot would continue to have been talked of in the same reverent tone that was so common during his days at Goodison Park; the clever, frugal manager who does more than most with so much less. We haven’t seen that this season at all – maybe he’s overwhelmed by the resources at his disposal, or the sheer enormity of the task at hand, but Moyes has been neither clever nor frugal since moving to Manchester; and now, he’s apologizing for it.

“The difficult season we have experienced was not something that I envisaged” wrote the embattled United manager in a special magazine sent to season ticket holders. “You are accustomed to seeing a successful Manchester United and the backing you have given the players and me throughout the season has been incredible,” he continued. “Supporting your team when they are winning is easy, but much harder when things are not going as well, and the loyalty you have shown us has been magnificent.”

There’s been a good number of parallels drawn between the current ails surrounding the Red Devils and the decline of footballing super-power Liverpool so many years ago, and though some would argue that they’ve been standing on the precipice for quite some time, the marked downturn in fortunes since the departure of Ferguson after 25-plus years at the helm of a seemingly unstoppable ship is palpable – and has lead to rumours that their best players are ready to get off at the next port.

Wayne Rooney’s contract situation was the big story in the summer, but as the season has worn on, another striker has come to the forefront of the rumour mill with whispers of unease between the new boss and Robin van Persie doing the rounds. Although the striker remained quiet for much of the season, in the recent wake of some poor results and more stories of breakdowns in their relationship, the Dutch striker has broken his silence by trumpeting the song of the party with perfect pitch.

“There is no doubt I’m learning new things and progressing with David Moyes,” van Persie told United Review ahead of Liverpool’s trip to Old Trafford. “The sessions we have on the training ground are fantastic and I’m learning a lot from them every day.” The Dutchman has come into some criticism for failing to replicate the kind of form he enjoyed during his first season in Manchester, but many a pundit has chalked that up to the change in tactics – or complete lack thereof – under the new boss.

Following a poor performance in the 2-0 Champions League defeat to Greek side Olympiakos, the striker appeared to criticize Moyes game plan, but he’s since argued that his comments were misinterpreted and that rumours of his unhappiness at Old Trafford are unfounded. “The truth is I’m very happy here,” he said. “I signed for four years and I’d be delighted to stay longer, beyond the next two years I have on my contract.”

After finally nailing Wayne Rooney down with a new long term, very lucrative contract, there would be little surprise if United strike while the iron is hot and try the same with van Persie. If the long running shenanigans of the Rooney ordeal are any indication of how that will work out, they’d be remiss not to get started now. With Nemanja Vidic set to leave the club at the end of the season, there’s been speculation surrounding who Moyes will hand the captains armband to, though the England striker appears to be the front-runnner – and now that he’s all smiles again, he’s been more than happy to talk like the skipper is supposed to.

“This hasn’t been the best season for us so far but our fans have still been brilliant and stuck by us so I would like to thank them for that” said the 28-year old when asked about how the match day atmosphere for this fixture. “It gives the team a massive lift when the fans are behind you and in full voice and I’m sure that will be the case on Sunday.” There’ll be no mention of prawn sandwiches from the captain elect anytime soon – though bar a few select occasions, United haven’t had a problem finding their voice when Liverpool comes to town. “There’s no doubt that this is one of the biggest rivalries in world football” enthused the former Everton man. “The two cities are close to each other and both clubs have a massive following with brilliant fans. It has all the ingredients for a great game of football for all football fans. ”