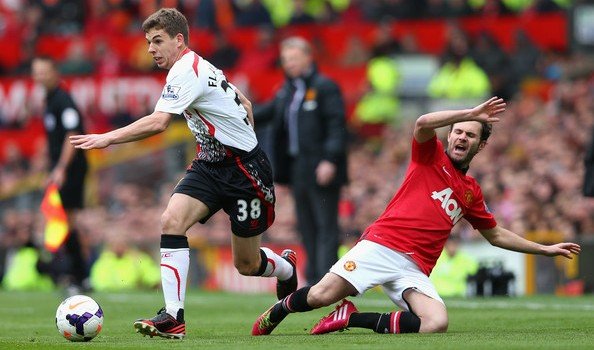 With league leaders Chelsea slipping up against Aston Villa on Saturday, the fullback believes that, with the end of the season approaching, the top sides are going to be wary of the threat a revitalized Liverpool poses, with both the Blues and Manchester City yet to visit Anfield.

Video by the incredibly talented @MostarLFC

“I think they are going to be worried,” said Flanagan when asked about the other teams in the title race. “We put a marker down (at Old Trafford). I think we are ready to push on and keep going. We all believe but our priority was top four at the start of the season. We are on track for that and anything else is a bonus.” A return to the Champions League was priority numero uno for Brendan Rodgers in his second season in charge of the Anfield outfit, but with Liverpool looking like the team to beat with the season closing out, a tilt at the title has become a real possibility.

When Liverpool take on Tottenham Hotspur in their last match of the month, next seasons Champions League spots could very well be decided. Having played a match less than the North London outfit, the Reds sit nine points clear of Tim Sherwood’s side, who despite spending a significant amount of money in the summer, look more likely than not to miss out on a return to Europe’s elite club competition after losing to Arsenal over the weekend. Although you wouldn’t catch a single Kopite complaining about a fourth place finish, with the gap narrowing, we can’t help but dream about the top spot.

With nine matches left in the season, the Reds are level on points with the Gunners in second place and a mere four points off of Chelsea, who hung on to the top spot despite dropping points on Saturday. “It’s always good when you see other teams around us getting beat. We saw the Chelsea result (losing at Aston Villa on Saturday) but we just concentrate on ourselves” the youngster continued. “We are just taking it a game at a time and keeping our feet on the ground.”

It’s not too hard for a Liverpool born and bred player to get excited for a match against Manchester United, but it takes some serious composure to keep your head and put in the kind of shift that Flanagan did. The turnaround under Brendan Rodgers has been a revelation – and it’s the emergence of players like Flanagan that have, in a large part, fueled it. Even though it took some injuries to get him into the side, the youngster has held on to his spot with both hands, exemplifying the winning attitude and desire to exceed expectations that the Northern Irishman has instilled into the squad.