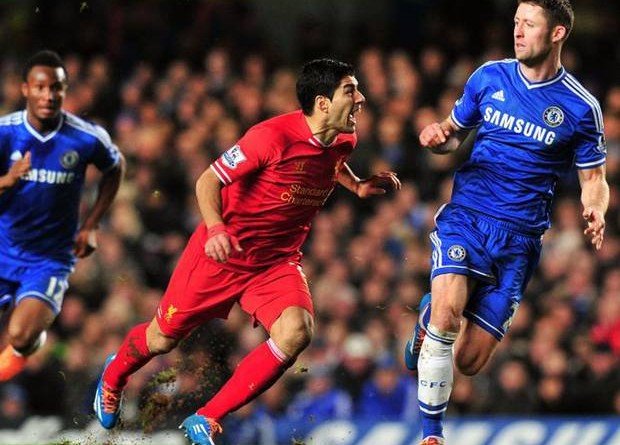 Analysis Feature
April 25, 2014April 25, 2014 Steven McMillan 0 Comments Brendan Rodgers, Chelsea, Chelsea stats, Fernando Torres, Gary Cahill, Jose Mourinho, liverpool fc, Liverpool stats, Liverpool vs Chelsea stats, Luis Suarez, Mark Schwarzer, Martin Skrtel, Philippe Coutinho, Premier League stats, Simon Mignolet, Willian
The last time Liverpool tasted defeat in the league it came at the hands of Chelsea. That statement isn’t so much a surprise in itself considering that the Blues are one of the top teams in the Premier League, but when you have a gander at the date, it’s a bit of shock.

You have to reach all the way back to December 29th of 2013 to find the last time Brendan Rodgers side didn’t take at least a point from a match. Their eleven match win streak contrast sharply with Chelsea’s run in the same amount of games with a draw and three losses punctuating their problems in the title race. Looking at bit deeper at the numbers, and doing some comparisons between some of the players that are likely to feature on Sunday, reveals a few more surprises. 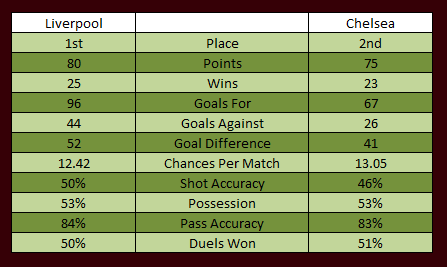 If I didn’t know better, I’d think these numbers were off; last weekends 2-1 reversal at the hands of Sunderland left Chelsea 5 points adrift of league leaders Liverpool going into this Sunday’s encounter.

The Reds have scored a staggering 29 goals more than Jose Mourinho’s side, but to the surprise of almost everyone, they’ve conceded 18 more. One kind of balances the other out, but when you move farther down the list, things stay just as tight with absolutely nothing separating them in the possession, pass accuracy and duels won. Just like in the reverse fixture, things are no doubt going to be tight.

With Petr Cech ruled out for the remainder of the season, it’s a toss up who’s going to be given the nod for Chelsea. Although rumours in the press today have Jose Mourinho handing third choice ‘keeper Hilario his first start since dinosaurs roamed the Earth, the sane choice remains Australian shot stopper Mark Schwarzer who backstopped the Blues to the goalless draw in the Champions League Semi-Final with Atletico Madrid.

Comparing either goalkeeper to Simon Mignolet is a bit asinine, but I did it anyways. You’re welcome.

It would appear that Gary Cahill is a better defender than Martin Skrtel, but it would also appear that the Slovakian is better going forward than the Englishman — which makes sense when you see that Liverpool have scored more goals and Chelsea have conceded far less.

Who is Jose Mourinho going to play? Frankly I’m not too sure and I’m not really caring at this point. With Eden Hazard ruled out, creativity is going to have to come from somewhere, and if Willian isn’t one of the players the Portuguese manager is planning on saving for the second leg of the Champions League, then we could see these two Brazilian’s go head to head.

Coutinho has more goals, assists and is better defensively, but considering his countryman is only two goals off and has created almost as many chances in less matches, it’s hard to separate the two.

Unlike the last two comparisons, this one leaves no room for debate. Torres many not even be given the chance to lead the line against his former club if his manager decides he’d be better suited for the Champions League, but that will probably just save him some massive embarrassment.

Forget the fact that Suarez tops the Spaniard in every single category and realize that the Uruguayan has scored more goals against one club this season than the former Reds favorite has managed all season. Ouch is about the only accurate word I can use to describe that.

Both the Liverpool and Chelsea stats both come courtesy of the good people over at Squawka.