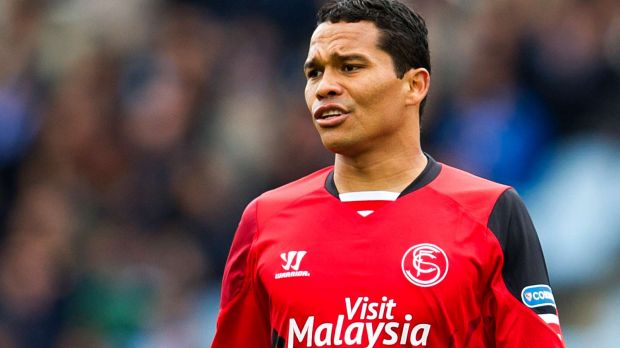 Sevilla Sporting Director Monchi confirmed earlier in the week that the Spanish club have yet to receive a concrete offer for highly rated Colombian striker Carlos Bacca, but that doesn’t mean that interest isn’t there with his representative confirming that no only have clubs been sniffing around, but that his client is considering his future.

“I spoke with Carlos on Wednesday night and we agreed we need a real solution. Clubs are telling him not to sign anything until they have made an offer but we are still waiting.,” said his agent Sergio Barila. “Liverpool and another English club are among those that have shown an interest but there are also clubs in Italy. What is clear is that they must meet the release clause but at this stage nobody has.”

The Reds, who are looking to add a top class striker to their pack to not only provide cover for the perpetually injured Daniel Sturridge, but also to avoid the kind of disastrous season they experienced in front of goal last season. Brendan Rodgers is also keeping an eye on want-away Aston Villa striker Christian Benteke, but they’re unwilling to meet his £32.5mil buy-out clause. With the Colombian’s a touch lower at £21.5mil, the Anfield outfit are rumoured to be considering the 28-year old as a serious alternative, but Barila says that there’s a few things his client will be looking for if serious offers start coming in.

“We are really looking at three things – number one is to have a happy family situation for his wife and son because he had a bad experience in Belgium,” he told the Guardian. “The second is to find a good team with a good project. Before he went to Chile, we wrote down a list of clubs that fit that description and Liverpool was on that list,” he continued. “The third question is the contract. He has a good salary in Sevilla but we know how much clubs in England can pay.”

2 thoughts on “Carlos Bacca Keen on Reds Move, But Club Will Have to Meet Buy-Out Clause”