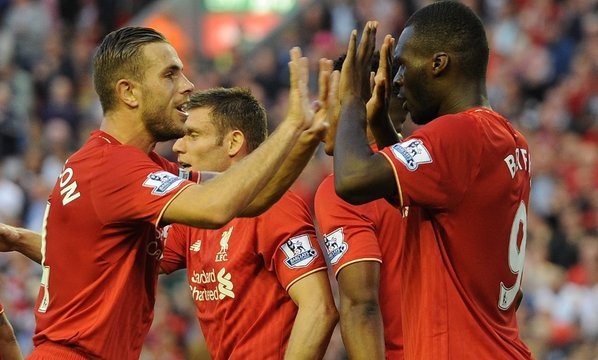 Though Liverpool boss Brendan Rodgers had a eager replacement in German midfielder Emre Can, the early substitution of Reds captain Jordan Henderson with a foot problem is a cause for worry with a trip to Arsenal only a week away.

The 25-year old, once again deployed alongside ex-Manchester City man James Milner in the middle of the park, didn’t look like his normal lively self as the Anfield outfit went into the half-time break on the back of Christian Benteke’s controversial first half goal and he lasted less than 10-minutes after the re-start with the Reds manager confirming in his post match interview that an injured foot was the culprit.

“He’s had a problem with the bottom of his foot. He hadn’t trained for part of the week, he was taking some painkillers with it. He did ever so well to even be out on the field, explained the Northern Irishman following the final whistle. “He wanted to try it, he wanted to give it a go, but you could see he was limited in his running,” he continued, obviously concerned. “He did great for us in the period of time that he was on but it’s important that we get victories and it’s important that we have fit players on the field and unfortunately for him he was just in too much pain.”

Although it’s a bit too early to get in a panic or start speculating wildly, should Henderson miss the trip to the Emirates Stadium, Liverpool could be in some real trouble on the back of a pair of unconvincing performances. Despite taking maximum points from their first two outings, the Reds have looked listless more often than not and in need of both direction and inspiration on the pitch — which, of course, is Henderson’s job.

More on this as news comes in…