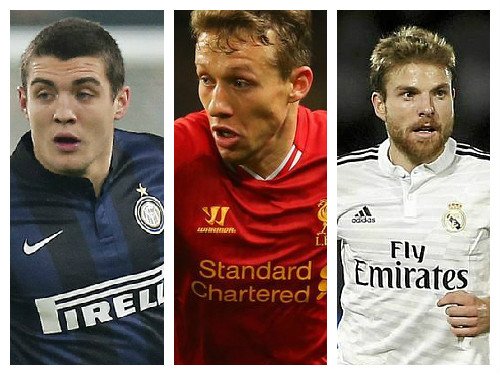 With Mateo Kovacic’s move to Real Madrid from Inter Milan for a rumoured £25mil set to be announced any time now, the Italian sides reported interest in out of sorts Liverpool midfielder Lucas could become more than mere paper talk in a matter of hours.

The long-serving Brazilian, who, despite not being transfer listed by the Reds, is apparently on the outs at Anfield with the club reportedly ready to listen to offers in the region of £7mil for his services with both AC Milan and Juventus reportedly monitoring the situation. Nerazzurri boss Roberto Mancini, a known admirer of his considerable talents, won’t be keen to let that happen though and with the high-earning Kovacic off the wage bill, a move for the experienced midfield man would make a whole lot of sense for the Serie A side.

This, of course, could see Liverpool’s interest in Real Madrid man Asier Illarramendi finally amount to something. The 25-year old has already been told that that’s surplus to requirements at the Santiago Bernabeu by new boss and Reds favorite Rafa Benitez, and with the young Croatian set to be unveiled in the coming days, shuffling him on will become even more of a priority.

Although the paper talk says that the Anfield outfit will not look to replace Lucas should he go, the lure of capturing a talent like Illarramendi could be too good to pass up for boss Brendan Rodgers. If you believe the back pages, Liverpool have already made two firm bids for the defensive midfielder, though Real haven’t been all too keen on playing ball quite yet. With just over two weeks left in the transfer window, they just might reconsider their position…

3 thoughts on “Liverpool Midfielder Could Be Involved in Massive Multi-League, Multi-Club Transfer Deal”