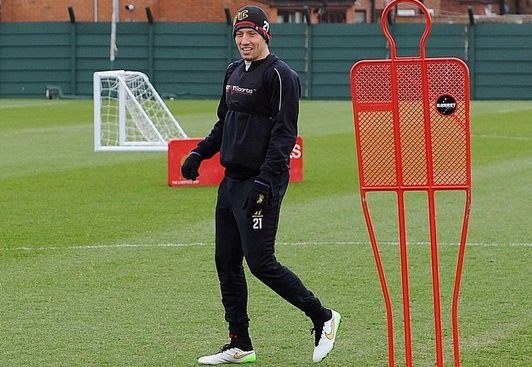 Despite rumours linking him with a move away from Anfield before the transfer window closes, Liverpool midfielder Lucas Leiva could be handed a recall to the squad by boss Brendan Rodgers ahead of the Reds trip to North London on Monday night.

With club captain Jordan Henderson widely expected to miss the clash with Arsenal through injury, the experienced Brazilian could be handed a lifeline in his attempts to stay on Merseyside. Earlier this week, Turkish side Besiktas confirmed that they were in talks with the Liverpool hierarchy over a potential loan move for multi-talented midfield man with the head of the Black Eagles transfer committee saying that talks were at an advanced stage, but it appears they may have been a bit hasty in their assumptions.

While it’s hard to predict just where Lucas will be plying his trade come September, it’s not that difficult to see that he’s needed — for at least the short term — by the Reds. Although Emre Can has been tipped to take Henderson’s place alongside ex-Manchester City man James Milner should the skipper bow out of the meeting with the Gunners, Rodgers could opt to throw the Brazilian into the fray instead with his experience and uncanny ability to shield the backline both factors that could place him above the young German when the starting eleven is being worked out.

As the clubs longest serving player, it’s believed that the 28-year old would prefer to stay at Anfield and fight for his place even with reports circulating that he’s had a falling out with his manager over playing time. Left out of the squad for the first two matches, the Reds have reportedly stopped short of placing Lucas on the transfer list, but will consider offers in the region of £8mil for his services. A number of Italian sides are reportedly keeping tabs on the situation, but for the time being, a loan looks to be out of the question. Should he get the chance — and take it — on Monday, we could be having a vastly different conversation come Tuesday morning…