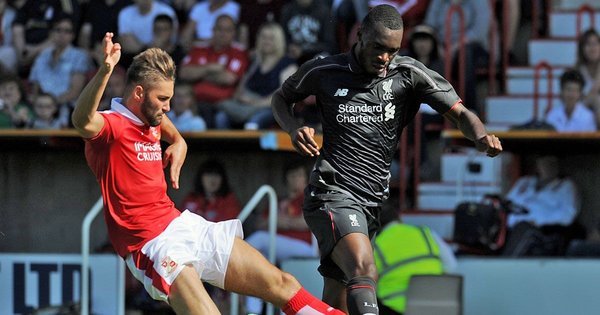 After missing out on the 3-1 win over Bosnia-Herzegovina earlier in the week with a thigh problem, Liverpool striker Christian Benteke could get a recall to the starting eleven when the Red Devils face-off against Cyprus in Nicosia on Sunday after returning to training.

The 24-year old, who was complaining of soreness prior to Liverpool’s embarrassingly one-sided loss to West Ham United at Anfield last weekend, left the pitch while the national side was being put through it’s paces to undergo a scan earlier in the week. Although it was never thought to be a real serious issue, the Reds hit-man subsequently sat out their crunch Euro-2016 qualifier at the Stade Roi Baudouin as the Belgians took one more step towards securing qualification for next summers show piece event.

With all seemingly well in Bentekeland, he’s being tipped to replace Everton counterpart Romelu Lukaku in the starting eleven after his compatriot turned in yet another frustrating performance for the national team against Bosnia-Herzegovina. That, of course, was never the main of concern of Liverpool fans though with their meeting with Manchester United immediately following the international break the only thing on their minds.

The media may be not be able to agree on when Reds striker Daniel Sturridge will be back in action, but it almost certainly won’t be in time for the trip to Old Trafford with the 25-year old only just resuming training with the first team following a spell in the United States where his rehabilitation from hip surgery was closely monitored by a team of specialists. Liverpool boss Brendan Rodgers has already said that he’s not going to rush him back to action, which means that keeping Benteke fit and firing is priority number one at Anfield these days. Thankfully, it looks like we won’t have to consider the possibility of having both of them on the treatment table at one — at least for the time being.