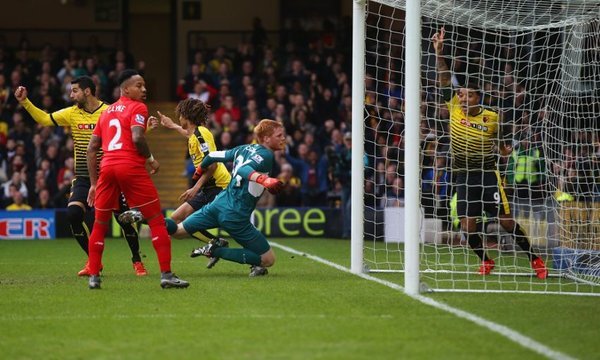 Waffling somewhere between extremely average and quite poor, Liverpool were unwatchable at times as newly promoted Watford FC claimed their fourth win on the bounce in the top flight since the tail end of the Eighties with a performance that was far too good for their esteemed visitors.

There were problems from the off with reserve ‘keeper Adam Bogdan, who was standing in for an injured Simon Mignolet, making a hash of a routine corner. Although replays seem to suggest the Hungarian had a case for a free-kick, Nathan Ake was on hand to poke the ball home after it was initially dropped by the Reds shot-stopper. Things quickly went from bad to worse when Odion Ighalo held off Martin Skrtel to fire home from a tight angle to double the hosts lead a mere 15-minutes into proceedings. The Nigerian would go on to add another before the final whistle when he nodded in Valon Behrami’s textbook cross and send Liverpool — now winless in their last four — back to Merseyside licking their wounds.

In my match preview I wondered which team would make the trip to Vicarage Road and it took less than five minutes to find out. For all the gleeful talk of Mignolet missing out and Bogdan finally getting a chance in the top flight, the student was emulating the master right off the hop with his first touch of top flight football for the Reds one no one except Ake will want to remember.

“It was a bad start – and really not the best reaction to the start and not the best reaction to the goals. It was a very difficult first half,” said Reds boss Jurgen Klopp in his post-match presser. “It was a better start in the second half after a few little changes and with a little bit of luck we could have scored a goal after half-time and the game would be open again, but we didn’t do it,” he explained matter of factly. “It’s the most disappointing moment in my whole Liverpool FC life. We came here to do something completely different to what you saw,” said the manager before expanding on that thought, “Between what we wanted to do and what everybody saw is a big gap – a big space – and that’s what we have to fill in the next few days for the next game against Leicester. Today, we have to accept the result and we have to work, keep on working and play better football.”

I’d say that won’t be easy, but you already know that, don’t you? Taking a cue from both Newcastle United and West Bromwich Albion, the Hornets got their tactics spot on with the echoes of Klopp’s disappointing final season at Borussia Dortmund dovetailing nicely with the end of the Brendan Rodgers era at Anfield. Lacking invention and being nowhere near as precise as what was required, the visitors created next to nothing with their hosts only too glad to concede possession and look for their own chances on the break — a game plan that has worked to great effect against the high-pressing, high-octane Reds and one that we’re sure to see repeated in the near future.

Going off injured just before the break, Skrtel’s hamstring will be a major concern for the Liverpool manager going in to the festive period with this match coming what looked to be a few days too early for Mamadou Sakho. Spending more than the last month sidelined, it’s hard to fault the Frenchman for looking rusty, especially when you compare him to his Slovakian partner — who up to now has played every minute of every Premier League match this season — and the way he was shrugged aside by Ighalo as he slashed home his first of the match. Couple that with our inability to remotely trouble Hornets ‘keeper Heurelho Gomes despite having the likes of Philippe Coutinho, Roberto Firmino and Adam Lallana all on the pitch at the same time, and it’s safe to say that we’ve got bigger problems than Sakho trying to find his feet again.

With the Premier League looking as topsy-turvy as I’ve ever remembered it, I suppose this result makes a whole lot of sense, but that’s far from the whole story and would rob the Hornets of the credit that they so richly deserve. That being said, this isn’t a Watford love-in, so if you’re looking for a congratulatory hand-job, I suggest you queue up somewhere else.

One of those days turned in to one of those weeks and is quickly becoming one of those months; the Liverpool job is never an easy one and Klopp is quickly finding out the task he’s taken on is far bigger than convincing the players that they need to work a bit harder and press a little higher. Across the league we’re seeing industry, desire and self belief win what’s been nothing more than a money game for far too long — something that’s been epitomised by the likes of Watford and pace-setters Leicester City. At the beginning of the season who would have predicted that we would’ve been stung by the former and dreading a meeting with the latter?