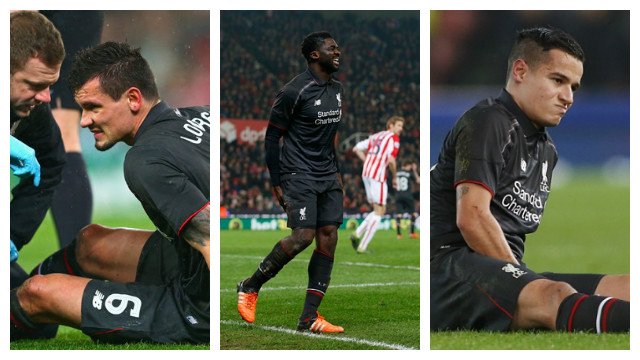 While Liverpool boss Jurgen Klopp has long maintained that he’s happy to work with the players at his disposal rather than make wholesale changes to the squad, fresh injuries to the likes of Philippe Coutinho and Dejan Lovren in yesterday’s League Cup semi-final first leg win over Stoke City could very well force the Reds into the transfer market this month.

“But it’s a big, big shadow for us over the game that we cannot ignore – we have two injuries [Coutinho and Lovren] and I honestly don’t know how serious they are,” he said following the final whistle. “They did not look too good and so we have to wait,” continued Klopp, before confirming that Kolo Toure’s apparent hamstring problem was just a cramp, though he stopped short of saying whether or not he’ll be available for Friday’s FA Cup clash. “[Kolo’s performance was] perfect. The best situation was the one just before he had cramp when he blocked the ball. Kolo played outstanding tonight and was really good for us, but we’ll see if he can play the next game.”

Liverpool have a laundry list of players out through injury with their two newest additions sure to be a major concern in the weeks to come. Speaking last month, Klopp said they’d only look to dip into the market if there was a need to fill a position through a player leaving or if even more players were sidelined — a scenario that has unfortunately come to fruition.

“It is a strange feeling because on one side it is very, very good then we have these injuries. Two weeks ago we had three centre backs, which is a good situation and the season started with five but now it is zero,” mused the Reds manager. “Maybe I could look at our training methods but we don’t train – we only recover. There is no training,” explained Klopp, making reference to the packed fixture list over the holiday season. “I’m responsible for these things and if you want to make me responsible for our hamstring strains then OK.”