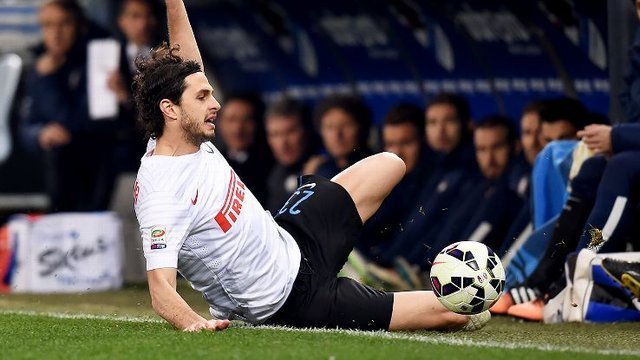 After losing both Philippe Coutinho and Dejan Lovren to hamstring injuries in the League Cup semi-final first leg win over Stoke City on Tuesday, Liverpool boss Jurgen Klopp confirmed that the club may be forced to dive into the transfer market to abate the ongoing injury troubles at Anfield.

With the Croatian defender now set for at least a short spell on the sidelines, Klopp is even shorter on defensive options with Mamadou Sakho still recovering from a heavy tackle in the loss to West Ham United, Martin Skrtel nursing his own hamstring problem, Joe Gomez out for the season with a knee problem and the status of Kolo Toure, who pulled up with cramp in the closing stages at the Britannia Stadium, still unknown.

Although the Reds have been heavily linked with a move for out of favour Borussia Dortmund hard-man Neven Subotic, a new contender has been thrown into the rumour mill with Inter Milan defender Andrea Ranocchia, who has been frozen out at the San Siro by Nerazzurri boss Roberto Mancini, apparently ready to make the move to Merseyside despite interest from a host of Serie A clubs and Premier League outfit Norwich City.

Reports differ from one media outlet to the next, but it’s not hard to imagine Liverpool making a move for the talented, if somewhat error prone, 27-year old. While some are saying that personal terms have already been agreed and a fee just needs to be hashed out between the two clubs, there’s others suggesting that the interest coming from the Anfield outfit is only cursory and they’ll be exploring a few different options before making a concentrated effort to bring the Italian defender to Anfield.