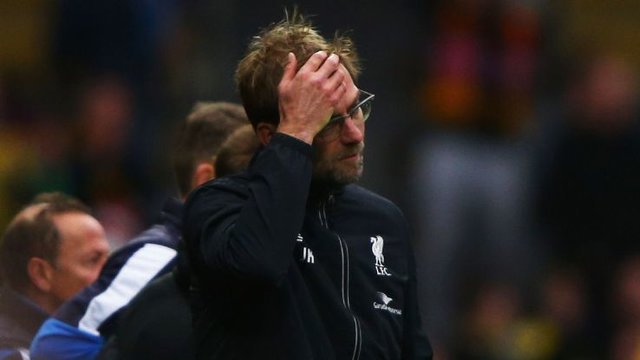 After having Philippe Coutinho, Dejan Lovren and Kolo Toure all pull up with hamstring problems at various stages of the narrow win over Stoke City in the first leg of the League Cup semi-final, it was pretty obvious that none of them would be available for the FA Cup meeting with Exeter City tomorrow, but Reds boss Jurgen Klopp’s injury prognosis was a bit worse than we hoped for.

“Phil is a bit more serious than Dejan, [who is] more serious than Kolo, but none of these players will be available for tomorrow,” he told reporters in his pre-match press conference at Melwood yesterday. “It’s always with muscle injuries you don’t know exactly.”

With the injuries piling up, it looks like Liverpool will be forced into the transfer market to draft in reinforcements with rumours of an injury to Jordon Ibe also doing the rounds, but as of yet remains unconfirmed by the club. Tiago Ilori, who will be returning early from his season long loan at Aston Villa, and fellow youngsters Ryan Kent and Sheyi Ojo, who have also been recalled from their respective clubs, will help fill the void for now with Klopp revealing it could be a little while before we see the Brazilian midfielder and the Croatian defender in action again.

“Kolo was a cramp, that’s not a problem, but after three days it’s not possible to play the next game. But, for sure, next week should not be a problem,” explained the Reds manager. “With Dejan the situation is I think he will be available after Manchester United,” he continued. And Phil needs maybe one, two weeks longer, so three weeks [out] for Phil. But it’s muscle injuries so you don’t know exactly. It’s really rare that it’s quicker, sometimes it’s longer, so we will see how long it takes.”