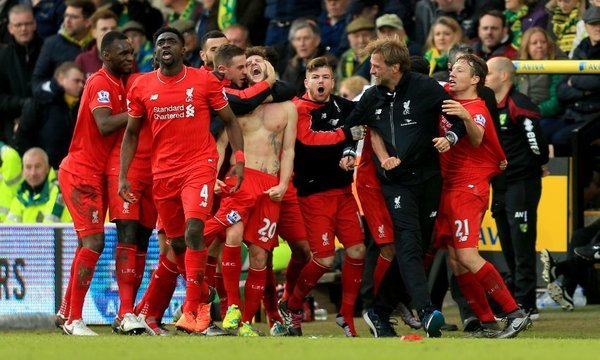 It was a mad finish at Carrow Road as two goals in injury time alone saw Norwich City draw level with Liverpool only to have their visitors snatch a dramatic late win in what was a fantastic — though defensively shambolic — nine goal thriller.

Canaries ‘keeper Declan Rudd got a foot to Roberto Firmino’s clipped shot towards the far post, but it wasn’t enough to deny the Brazilian as he opened the scoring just before the 20-minutes mark. The hosts were straight back into it though when the Reds inability to effectively clear a corner ended with Dieumerci Mbokani scoring with a cheeky back-heeled effort. Alex Neil’s side would add a second before halftime when Steven Naismith scored his first goal since moving to the Norfolk outfit and the ex-Everton man would draw the foul just after the break that’d see Wes Hoolahan beat Simon Mignolet from 12-yards to widen the gap.

For all intents and purposes, that should have been three-points to Norwich and the travelling Kop heading back to Merseyside grumbling about defensive errors and a lack of heart in front of goal, but Firmino would ease on the ball on for Jordan Henderson to smash home before the Brazilian doubled up to draw the two sides level after substitute Adam Lallana, who would go on to score the winner, found him in acres of space.

“A strange afternoon,” mused the Reds midfielder, speaking to the BT Sport following the final whistle. “I was just delighted to get the three points in the end. When they scored you just think it was going to be one of those days. A massive three points for us,” he enthused, obviously chuffed with the result. “That [scoring] was one of those moments in your career that just happens, you go with your flow.”

The fact that every shot on target up to that point had resulted in a goal would have been enough to tell the tale, but there was still more to come and the Reds would complete the comeback as a whole when James Milner ran on to the end of a horrible back-pass from Russell Martin to put the visitors in the ascendancy. One would have thought that must surely be the end with Liverpool boss Jurgen Klopp throwing on an extra defender in Steven Caulker for some added insurance, but unable to deal with yet another long, high ball, Sebastien Bassong would send Carrow Road into raptures as his sweet strike from 18-yards bulged the back of the net.

The chorus of “Sign On” raining down from the stands would be short lived though as Norwich had their own troubles clearing the ball out of their box. It was a right place, right time moment for Lallana as he found himself enough space to smack a volley off the ground before it bounced past Rudd and into the top corner. Cue wild celebrations from the Liverpool bench as the squad mobbed Klopp — who ended up with a pair of broken glasses — on the touchline and the travelling Kop responded in kind by going absolutely mental.

Frustrating and elating in equal measure, that match made no sense to me, but I loved every minute of it. With all due respect, both you and I know that we shouldn’t be conceding four goals to a side like Norwich; the areas we need to improve in are obvious. That being said, shambolic defending sure can be entertaining. Now, I’ll spare you “funny old game” cliches and let you move on with your day.