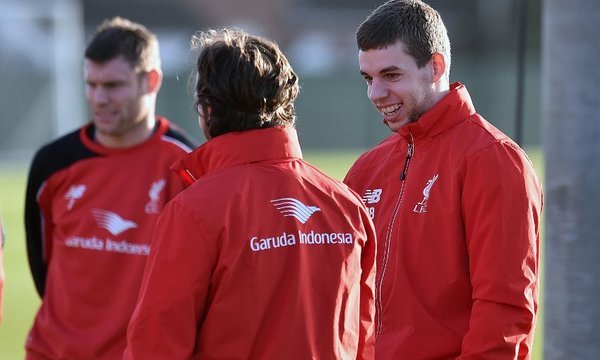 Liverpool winger Jordon Ibe played fox-in-the-box at the Britannia Stadium to give the Reds a slender lead heading to the second leg of their League Cup semi-final with Stoke City, but after doing it on the proverbial cold, wet night in the Potteries, they’re going to have to be extra vigilant at Anfield if they want to book a trip to Wembley.

Forever fragile at the back, one has to wonder how Liverpool plan on stopping the trident of Marko Arnautovic, Xherdan Shaqiri and Bojan Krkic after they gave up four goals to relegation threatened Norwich City at the weekend. This, of course, is no longer the long-ball, smash and grab Stoke side of years past, and travelling to Merseyside trailing by a goal, Potters boss Mark Hughes won’t have his side just sit back and wait for something to happen — he knows all too well that despite Liverpool giving up four goals, they were good enough to score five.

“It’s a great game for us. It is a cup semi-final for goodness sake and if we can’t get up for that there’s something wrong somewhere, so I anticipate it will be a completely different performance on Tuesday,” said the Welshman. “Yes there’s a lot of goals being scored against Liverpool but they also have the ability to score at the other end too so you have to be mindful of that,” he said, before adding, “Going there is about making sure our focus is exactly what it needs to be for Tuesday and if it is we will go close.”

With one eye firmly on Tuesday, Hughes made a number of changes to his side as league leaders Leicester City brushed past them with relative ease at the weekend. Recalls to the starting eleven are almost certain to be handed to Bojan and Arnautovic with neither featuring at the King Power Stadium, but the Potters will be without Geoff Cameron, who is yet to recover from an ankle problem, and crucially, they’ll travel without club captain Ryan Shawcross after the defender was ruled out for the next month with a back problem.

Liverpool, of course, have defensive worries of their own with Nathaniel Clyne almost certain to miss out after taking a knock to the knee against the Canaries on Saturday. Jon Flanagan could be handed his first start since May 2014 in place of his compatriot, but the midweek encounter is likely to come too early for Dejan Lovren who has only just returned to first team training.

That almost certainly means that Mamadou Sakho will be joined by Kolo Toure in the heart of the defence — which isn’t the most appealing prospect after the shambolic defending on display at the weekend. With a spot in the final on the line, it’s unlikely that Reds boss Jurgen Klopp will make too many changes from the side that narrowly beat Norwich — which means that the likes of Roberto Firmino, Jordan Henderson and Emre Can should keep their places — but the German manager will be looking for an immediate improvement from set-pieces after once again addressing the on-going problem with his team and making a big point of talking about it in his pre-match presser.

“Of course, we know about this problem. I’m sorry to say it’s not a problem we can ignore and try to sort it that way,” mused Liverpool supremo, wary of the threat Stoke pose from set-pieces. “It’s obvious we’ve not done too well, but we are a football team and always working on our weaknesses, as we are in this short period between [games],” he continued. “It’s maybe not the best time, but we spoke about it really intensively, we had good talk together – not the first one, but hopefully the last one!,” said Klopp with a laugh, before adding, “In the end it is clear – it’s not about the formation because we changed that, it’s not always about the quality of the set plays, it is more often about what we are doing in the situations.”

While our run in the League Cup has been a welcome distraction from our faltering attempts to secure a spot in the Champions League for next season, there’s always been one thing that’s held true for me about this football club — it’s all about the silverware. It’s too early to start talking about bagging a spot in the final, let alone lifting the trophy for a ninth time, but we’re in the drivers seat and more than capable for steering this one home.