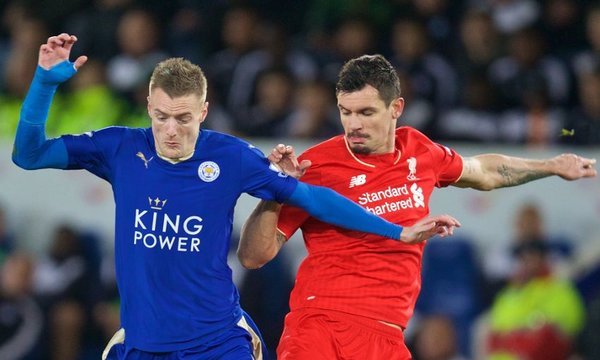 Leicester City kept their march on the Premier League title going steady as Liverpool, a team they hadn’t beaten in fifteen years, rolled over and played dead as the Foxes picked up a crucial win at the King Power Stadium.

Mere seconds past the hour mark and only moments after Roberto Firmino had registered his first shot on goal, Jamie Vardy got on the end of a picture perfect 50-yard pass from Riyad Mahrez and he did the Algerian one better by smacking it first time past a stranded Simon Mignolet to claim what’s sure to be a goal of the season contender. The Englishman was on hand to claim a second, and the eventual winner, just over ten minutes later when some calamitous defending from saw Shinji Okazaki’s shot deflected into the path of the 29-year old for a simple finish into the top corner.

Buried under fixtures, the difference in energy levels in the later stages was easy enough to see. The Reds, playing their third game in seven days, looked surprisingly spry during the opening exchanges, but as the match wore on they became lethargic and lacking in focus. In contrast, Claudio Ranieri’s well drilled and well rested Leicester side were enjoying their first outing in ten days. With that being said, after Jurgen Klopp deployed mostly youth and fringe players for the scoreless draw with West Ham United at the weekend, fatigue isn’t the most convincing excuse.

“It’s rare a journalist says something more positive than the manager,” said Klopp when asked by a BBC reporter about his sides work ethic. “I’m not too fine with our game today. We could have played much better,” stressed the German. “We had a few shots where we could pass and a few passes where we could shoot. We created half chances but not real chances.”

While it was hardly a disastrous performance, it wouldn’t be one that would live long in the memory — even if we had won. Often afforded time on the ball and quick to win it high up the pitch when we lost it, it’s not like we were denied opportunities to create chances, but our lack of confidence in the final third seems to mushroom with every missed opportunity and broken down attack. Making the simple things hard and the hard things impossible, our attacking line isn’t going to simply walk the ball into the net, but that appears to be the only game plan with no one ready or willing to step up and take a chance.

Daniel Sturridge, Philippe Coutinho and Divock Origi are all expected to rejoin first team training later this week which should go a long way towards solving our woes at one end of the field, but Klopp looks no closer to solving the defensive problems at the back than he did we he first arrived in October with Vardy’s second goal a prime example of the poor decision making on display. Mamadou Sakho, letting a high ball bounce rather than deal with it straight away, is unable to do anything as he’s caught underneath with Okazaki’s shot rolling straight into the path of Vardy after he eluded the attentions of Dejan Lovren in the area.

There’s other examples to point to and far more to talk about, but you don’t want to hear it and I most definitely don’t want to write it. If our hopes of securing finishing in the top four weren’t extinguished already, they are now. Winning the Europa League looks like our best shot at securing Champions League football for next season, but if we keep playing like this, we can forget about that — or the League Cup for that matter.