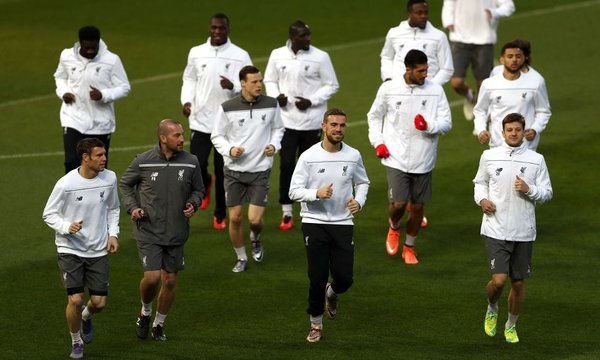 Liverpool may be firmly in the drivers seat ahead of their trip to Old Trafford tomorrow, but if anyone thinks that the Reds have already booked their spot in the quarter-finals of the Europa League at the expense of their bitter rivals, they may have another thing coming.

If the atmosphere wasn’t enough to have him reaching for the Tylenol, goals from Daniel Sturridge and Roberto Firmino sent Manchester United boss Louis van Gaal home with more than just a little bit of a headache. Short on ideas and unable to cope with the high press, the Dutchman saw his side run ragged on Merseyside last week, and hosting West Ham United in the FA Cup at the weekend, they had to rely on bit of last minute interventionism from Anthony Martial to secure a replay at Upton Park — though it left the Red Devils without a win in their last three-outings.

“Tomorrow we only have to think we have to beat Liverpool – and beat them 2-0 not 3-0 because we can do it in extra time,” said van Gaal in his pre-match press conference. “We can do it 2-0 and then we have a chance to reach the next round,” he continued, matter-of-factly. “You know we have scored goals within three or four minutes this season so it is possible.”

The last time the Reds visited Old Trafford, it didn’t end well for them with a 3-1 reversal on the docket, but both sides look like vastly different teams to the ones that ran out in the fall sunshine. Beginning to find their rhythm under Jurgen Klopp, Liverpool have the spring in their step and the confidence coursing through them that was missing back in September and with United dealing with a bit of an injury crisis, it’s not hard to imagine the tables turning.

Although he played a cameo role in the first leg, Bastian Schweinsteiger still isn’t fit enough for the starting eleven so Marouane Fellaini, who was lucky to avoid a sanction from UEFA after he appeared to elbow Emre Can in the throat in the first leg, almost certain to start in the middle of the park. Ashley Young, Wayne Rooney and Phil Jones are just a few names that won’t be on the teamsheet tomorrow as they work through their respective ailments, but Jesse Lingard should slot back in after missing the first leg through suspension.

If nothing else, United will have David de Gea between the sticks tomorrow and that could very well be the decider should they claw their way to an early lead. The Spaniard has been in fantastic form and was the only reason the Reds weren’t able to run up the score in the first leg, but with both Sturridge and Firmino expected to retain their spots and Philippe Coutinho itching to get his first goal against their arch rivals, United are going to need a lot more than some solid ‘keeping if they want to turn the tide.

“[It would mean] a lot,” said Coutinho when asked about scoring against United. “Whenever we score a goal it is very good. Last week I was close but ended up missing,” conceded the Brazilian. “[I have] to continue working to be able to score goals and, of course, to score a goal in a game like this, in the Europa League, would be a very special moment.”

Having been the architect behind so many of the Reds best moments this season, it’d be fitting the see the 23-year old bag another big goal in another big game, but Reds around the world would be happy to see it come from anywhere — I’d be just as happy with a Jordan Henderson blast from the edge of a box or at the end of a bombing run from Alberto Moreno as I would with Adam Lallana scruffing one off of Chris Smalling in the 90th minute.

A two goal deficit isn’t an impossible gap to overcome, but should Klopp’s side grab one on the road, the tie could very easily get away from his counterpart with the away goals rule and the potentially hostile environment of Old Trafford conspiring to make proceedings mighty uncomfortable for van Gaal. It’s one thing to be given abuse on the road — that’s expected — but when it comes from your own supporters, that’s a completely different story. It might sound like boos to everyone else, but that’d be music to my ears…