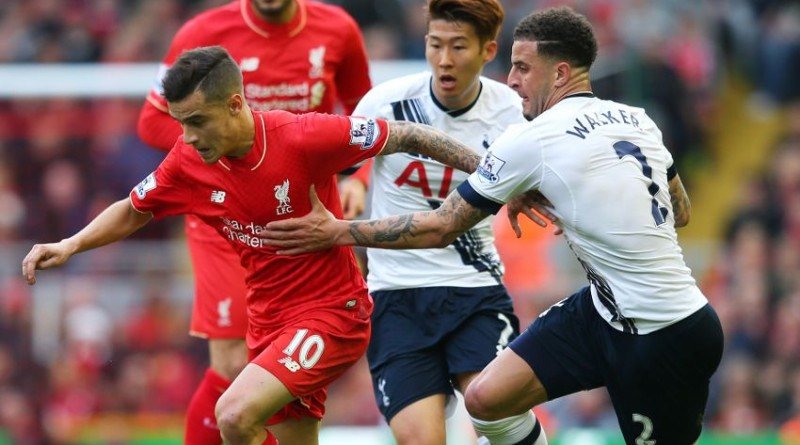 This is a fixture that’s produced a plethora of goals in the last couple of years, but even though there were quite a few chances for both sides, neither could truly take advantage — a continuing and worrying trend for Liverpool.

Arguably the better side throughout the first half, the hosts would have to wait until after the break to find the back of the net with some simple, but effective interplay between Daniel Sturridge and Philippe Coutinho ending with the Brazilian wheeling off in celebration. The festivities would be short lived though as Harry Kane restored parity just over five minutes later, taking advantage of some good work from Christian Eriksen before turning Dejan Lovren and firing beyond a diving Simon Mignolet.

That neither side could fashion a winner was as surprising as it was frustrating, though you wouldn’t be remiss to attribute that to the good work of the Reds ‘keeper as well as his counterpart in Spurs shot-stopper Hugo Lloris with the Frenchman making a number of clutch saves to keep the likes of Sturridge and the lively Adam Lallana off the score sheet.

“We got the draw and we could have won it in the first half, and the second half too of course. We made a lot of really good moments,” explained Liverpool boss Jurgen Klopp in his post match press conference. “I told the boys at half-time that it looked a little bit like a ‘stop and go’ game, where our machine is always on go. It was really good and then we had a stop. I don’t know why, we have to watch it,” he said of Spurs equalizer. “Nearly all the moments Tottenham had in the first half were because we gave them the ball and that doesn’t make too much sense.”

And, of course, he’s not wrong — it really didn’t make much sense at all. The hangover that often precedes an international break is not a new phenomenon, but some of the passing on display was bordering on obscene with Emre Can, who will miss the Reds next two Premier League matches after picking up his tenth yellow card of the campaign, and James Milner, fresh off of captaining England, two of the worst offenders.

When you couple that with Mamadou Sakho having one of those days where the Frenchman can’t seem to do anything quite right, it was a surprise that Tottenham didn’t punish us further — though the visitors weren’t at their swashbuckling best either with the likes of Dele Alli, Son Heung-min and the usually eagle-eyed Eriksen unable to conjure up a much needed go ahead goal.

Chasing surprise package Leicester City at the top of the table, the draw allows the Foxes the opportunity to widen the gap on their nearest chasers when they hosts Southampton tomorrow. Even if they’re unable to catch Claudio Ranieri’s side, they’ve pretty much guaranteed themselves a spot in the Champions League next season and that’s a serious accomplishment in itself.

Obviously it’s also something that we’ll almost certainly be left envious of with our chances of finishing in the top four taking a serious dent between today’s draw and the agonizing loss to the Saint’s just over a fortnight ago. Winning the Europa League remains our best chance of sneaking in through the back door, but I’ve got a good feeling that Borussia Dortmund isn’t going to be quite as forgiving as Spurs were. If we don’t take our chances, we can kiss that opportunity goodbye.