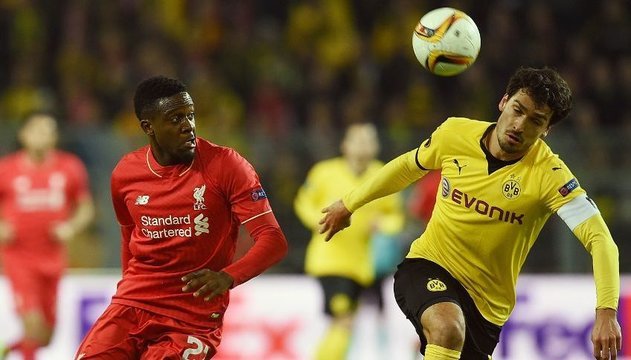 When you put aside the fact that we missed a number of clear cut opportunities to run up the scoreline and that we conceded another soft set-piece goal, it’s really hard to complain about running out on even terms with Borussia Dortmund last night — and considering we’ll go in to the second leg with an away goal tucked away for safe keeping, Jurgen Klopp’s return to the Westfalenstadion was nothing short of a resounding success.

Very much against the run of play, Divock Origi justified Liverpool boss Jurgen Klopp’s decision to start the young Belgian when he latched on to Jordan Henderson’s flick-on before holding off two defenders and wrong footing BvB ‘keeper Roman Weidenfeller with a composed finish just past the half-hour mark.

The 20-year old would make a hash of a one-on-one with the German shot-stopper only moments before the break and the visitors would be made to pay for their wastefulness when Mats Hummels — restored to the starting eleven after being rested at the weekend — waltzed unimpeded through the box to head past Simon Mignolet not long after the re-start.

If Weidenfeller shared any part of the blame for Origi’s opener, the veteran ‘keeper made up for it with interest as the half wore on, producing a stunning series of saves in short succession, denying Nathaniel Clyne and two efforts from Philippe Coutinho along the way.

“Dortmund is a pretty good side and everyone could see that but we had our moments and we could have won the game,” said Reds boss Jurgen Klopp following the final whistle. “I’m pretty sure a lot of people thought we would lose 2, 3 or 4-0. But at some moments we had Dortmund and around our goal we were brilliant,” enthused the German manager. “We are not that far on our way like they are and we cannot at the moment play like they play, but we can defend and score goals so we can win.”

Substituted at halftime after picking up what looks like a knee problem, Henderson remains out of sorts with his ongoing issues with his heel no doubt playing a massive part in his inability to influence the ebb or flow of the match, but the visitors looked far more in control with the calming influence of Joe Allen ticking things over in the middle of the park.

While the away goal is a massive boon to our cause, it was keeping Dortmund quiet that was the real trick and on his return to a stadium where he remains much beloved, Klopp got his tactics just right to deny the boys in yellow from doing too much damage. After a shaky 90-minutes against Tottenham Hotspur at the weekend put their partnership in doubt, the Reds manager kept his faith in Mamadaou Sakho and Dejan Lovren and was rewarded in kind with the Frenchman putting in an imperious — and familiarly awkward — performance at the back while his Croatian sidekick made up for any of his missteps or shortcomings with a no-nonsense performance of his own.

The attacking trio of Marco Reus, Pierre-Emerick Aubamayeng and Henrikh Mkhitaryan were kept from settling into a rhythm or making much of a impact as Klopp continually shifted his defensive line to keep his counter-part in Thomas Tuchel guessing, but this one is far from over.

“We are able to score away goals as well,” said the BvB boss, quick to remind the press of their trip to White Hart Lane in the last round. “We are not frightened and we are not too disappointed. Tonight was not our top performance and to win you need a top performance,” conceded Klopp’s successor. “We have been to a lot of places and scored and won. It’s half-time and the players are confident. We are looking forward to the game at Anfield.”

So, of course, is everyone else. After a stirring rendition of you’ll Never Walk Alone — a song sung by both sets of supporters — this one never really slowed down. The atmosphere from the stands, the action on the pitch, the screaming and undulating from the managers on the sidelines, it was a roller-coaster from the start and it won’t be over until the final whistle is blown on Merseyside next Thrusday. Hopefully we’re the ones getting off the ride high-fiving and smiling and not the ones puking and falling over…