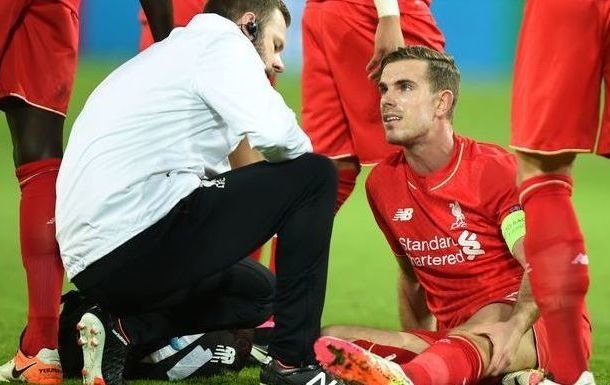 Yanked at half-time after taking a knock to the knee during what was a fairly ineffective performance, it’s being touted that Liverpool captain Jordan Henderson could miss the remainder of the season after leaving the Westfalenstadion on crutches after the Anfield outfit ran out a 1-1 draw with Borussia Dortmund in the Europa League last night. Although wouldn’t be drawn on speculation, Reds boss Jurgen Klopp didn’t sound too optimistic as he faced the press following the final whistle.

“Dortmund is a pretty good side, everyone could see, but we had our moments. We could have won the game, that’s how it is. We concede this goal after a set-piece, that’s not too necessary but overall the disappointment is Hendo,” said the German manager with an obvious pang of disappointment in his voice. “Hendo’s injury is a knee injury so it doesn’t look too good,” said Klopp in his typically blunt fashion. “That’s really bad news. (He’ll have a scan) for sure tomorrow.”

With a meeting with Stoke City in the Premier League coming up at the weekend and the return leg against BvB just over the horizon, the loss of Henderson could be a major blow to the Reds cause despite the fact that they looked far more balanced when Joe Allen was introduced in his place. While it’s still early doors, should his injury be as bad as feared, not only could the former Sunderland man miss the remainder of the season, he could miss out on Euro-2016 entirely with England manager Roy Hodgson set to name his squad in the middle of May.

“Jordan is really frustrating because each team in the world needs a little bit of luck, but it looks like we don’t have it,” continued the Liverpool manager. “We need to wait for the scan and we hope for the best, but it doesn’t look good,” he conceded. “I don’t want to speculate, what can I say until we have the scan, but it is not a small thing, I think, but we have to wait.”