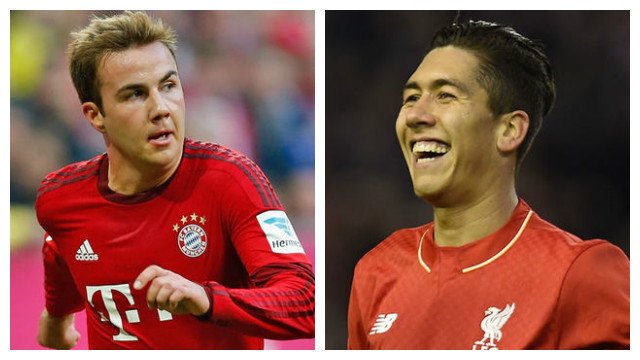 Talk of Liverpool’s interest in Bayern Munich attacking midfielder Mario Gotze has continued to gather steam over the last couple of days with incoming boss Carlo Ancelotti reportedly telling the 23-year old he should find a new club if he wants to play regular first team football and president of the Bavarian outfit Franz Beckenbauer publicly suggesting that he link up with former boss Jurgen Klopp at Anfield.

“I am fairly relaxed,” Gotze told German tabloid Bild ahead of what could be his last match in a Bayern shirt. “We’ve won the German championship. I have won my fifth German championship. The joy outweighs everything. I can promise that I will give it my all next weekend,” said the talented attacker, who was keen to discuss the German Cup final, but was less chatty when the subject of his future was broached. “I know that I still have a valid contract,” he said cautiously. “We’ll see about the rest.”

Should the Reds beat Sevilla in the Europa League final on Wednesday, they’ll have Champions League football on offer for next season — something that all top players take into account when contemplating their future. Whether or not he’d have the chops to hack it in England remains to be seen, but Roberto Firmino, who traded the Bundesliga for the Premier League in a big money move last summer, can see him fitting right in with the Merseyside giants.

“I know Gotze well from my time in Germany, when I played with Hoffenheim against Borussia Dortmund and Bayern,” the Reds attacker told Bild when asked about Gotze. “He has incredible qualities in attack,” enthused the Brazilian, talking up the talent being wasted on the bench at the Allianz Arena. “He would fit in well with us, and he will surely help us with his class also.”