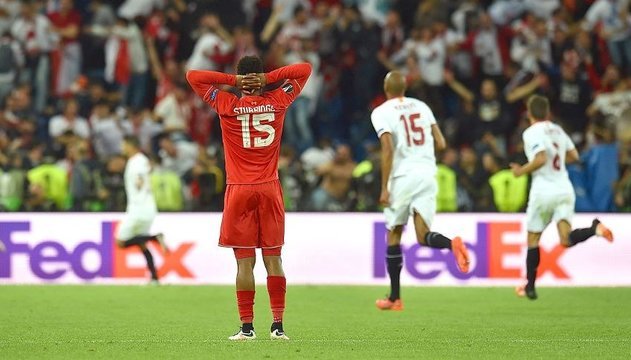 It’s not enough to say that I’m shattered after that one; the first European final since 2007 and we end up losing almost in spite of the expectation that was placed on our shoulders. These might be the breaks, but they don’t make them any easier to take, do they?

Daniel Sturridge capped off a routinely dominate first half with a side-footed goal audacious enough to be the showpiece of a Europa League final, but that was far from enough to make sure a gleaming hunk of silver ended up in our trophy cabinet. Kevin Gameiro added his sixth in his last seven appearances in Europe to level the scores less than a minute after the break and a double from Sevilla captain Coke would make sure that the Reds were down and completely out before the final whistle was blown.

You can yammer on about blown calls, handballs, nonsense refereeing and should of, would of, could ofs, until no one will listen to you, but it won’t matter one little bit. The fact of the matter is that Sevilla FC have claimed their third Europa League title on the hop and they’ve deserved it.

“To be honest, what I think about not being in the Champions League, is that we have to use the time. It is not about the size of the squad, it is about using the time in training to get better,” said Reds boss Jurgen Klopp, obviously feeling less than pleased in his post match interview. “I promise everybody we will use it and come back stronger,” continued the charismatic German, before adding, “It was 50-60% of our usual quality and we have to accept that. We will come back.”

Klopp, if you remember, said something very similar after we lost out to Manchester City in the League Cup final back in February. Despite the obviously forced upbeat tone of his post-match presser, it’s hard to doubt the propensity behind his words — the fact that we’ve only stumbled at the very last hurdle in both of these competitions is telling in and of itself. Think back to September and the fact that we’re here to tell the tale is a minor miracle.

Honestly though, I don’t really want to talk about that right now, because, as wooly as I might be might be, this hurts; it’s worse than you might be willing to believe, but that’s probably based solely on the fact that I write this garbage for fun. The kind of idle chatter that you, who probably hasn’t bothered to read this far, has in passing, I manufacture for my own enjoyment. It costs me very little financially since I have some sense for business, but the time I put in to it you may not be able to comprehend.

Our boss may have lost his last five major finals as a manager, but I’ll reckon that I’ll be feeling worse than him when tomorrow morning rolls around. Unlike the Reds manager, I’ll be expected to turn up for work in a timely fashion despite all the malt liquor I’ve imbibed — thankfully, and rightly so, he’ll be given a few days to relax while I’ve got projects on the go that need to be attended to. After a few belts of Jameson, I’m not quite as bothered and you shouldn’t be either.

I’ll never, ever, wave this away as just a football game, but I’m not about to to pretend that at the beginning of October I had any allusions of playing European football at the end of May. To be fair, I didn’t think we’d be playing football that mattered at all by this point in the year. With that being said, I’d rather come up short in a final than be content with finishing fourth year in and year out and celebrating that like it was some sort of grand accomplishment — I’m not about to disparage top level European football considering the fact that I pine for it on a regular basis, but I’d rather have a shot at lifting a silly piece of silver than target fourth best.

Is it better to have loved and lost to have never loved at all? I’m not sure, but I’d rather go to Basel in the spring than sit around waiting for next season to start only to be disappointed about having to wait for the next season to start before I can be disappointed again. You have to be in it to win it, and I’d rather be a contender than a perpetual loser. Malt liquor tastes better when you’ve got problems, and right now, it tastes pretty damn good and I’m ok with that…